June 25 will make the tenth anniversary of the Day of the Seafarer as proclaimed by the International Maritime Organization and the United Nations. Coming at a particularly challenging time as seafarers continue to struggle with the issues created by the COVID-19 pandemic, a broad range of organizations will be joining in seeking to further raise the concerns for crew welfare.

This year, the Day of the Seafarer campaign focuses on the calls to recognize seafarers as key workers and to provide them with the support, assistance, and travel options open to all key workers during the pandemic. The IMO goal is to use the activities to highlight that seafarers are playing an essential role in maintaining the flow of vital goods, such as food, medicines, and medical supplies. The crisis has led to difficult working conditions for seafarers, including uncertainties and difficulties about port access, re-supply, crew changeovers, and repatriation.

IMO Secretary-General Kitack Lim used his Day of the Seafarer message to again highlight the unique and essential work of seafarers. "Just like other key workers, seafarers are on the front line in this global fight. They deserve our thanks. But they also need – and deserve – quick and decisive humanitarian action from governments everywhere, not just during the pandemic, but at all times", Mr. Lim said.

To further highlight the concerns for seafarers’ welfare, the IMO is also conducting several activities. On Friday, June 26, the IMO is hosting a public webinar (webinar details) which in addition to Mr. Lim will include representatives from the International Chamber of Shipping, the International Transport Workers’ Federation, Stella Maris and the Royal Association of the Netherlands Shipowners. The webinar will address issues seafarers are facing during the pandemic, focusing on the challenges of crew changes and repatriation.

The IMO is also launching a social media hashtag campaign #SeafarersAreKeyWorkers, calling on everyone to join the global call for proper recognition, and action, for seafarers.

Other organizations are joining with the IMO to use this as another opportunity to call attention to the current situations seafarers are facing. 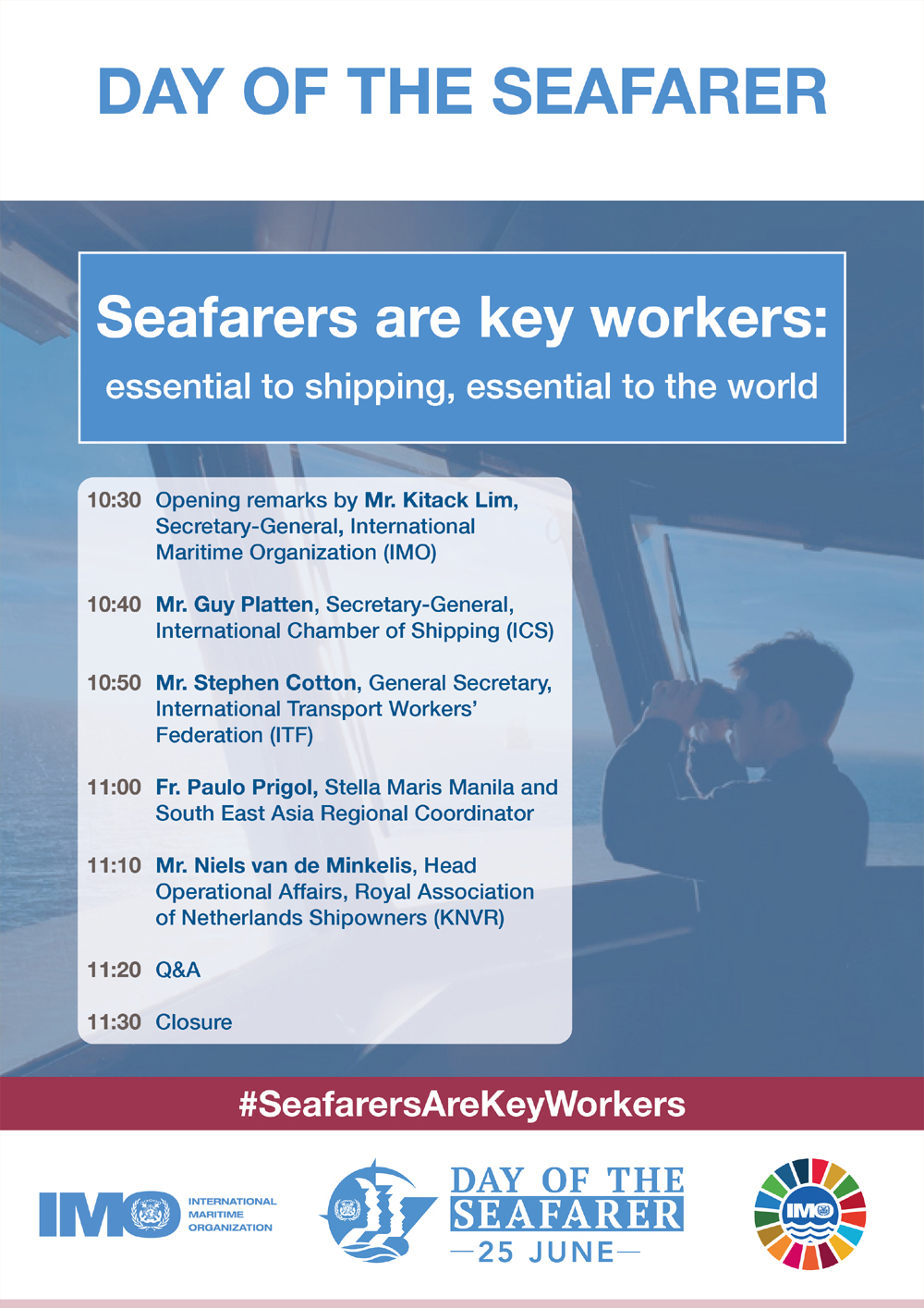 The International Association of Dry Cargo Shipowners issued a statement saying that it estimated 30 percent of all seafarers on cargo ships are still on their ships despite having completed their contracts and that at least five percent have been aboard for more than 12 months in breach of the Maritime Labour Convention.

“We at INTERCARGO are calling on governments, health, maritime and airline authorities together around the world to promptly resolve this untenable situation,” says Dimitris Fafalios Chairman of INTERCARGO. “Not only must we consider the severe effect on the mental health and well-being of seafarers, but also the very real danger to safe operations posed by exhausted and mentally fatigued crew on board. We need governments to recognize the commitment that seafarers have made during the pandemic, provide them with key worker status, and open the borders, allowing seafarers to return home.”

INTERCARGO thanked those governments that are facilitating crew change, while also urging the leaders of maritime nations to ensure that after June 30, 2020, no cargo ship will sail with seafarers on board who have served more than their initial contract period.

“The 2020 Day of the Seafarer campaign pays tribute to seafarers and acknowledges their sacrifice and the issues they face,” said Spyros Tarasis, Vice-Chairman of INTERCARGO. “Many seafarers have been away from home for months and are unsure when they will be able to return home due to travel restrictions. We join calls for governments around the world to treat seafarers with the respect and dignity they deserve so that they can continue to provide the vital services that keep world trade moving.”