On Wednesday, Hurricane Irma swept over Puerto Rico, leaving one million residents without electrical power and 150,000 without running water. Flood levels have been reported in rivers across the island, and more rain is expected. The U.S. Coast Guard has begun overflights to assess the damage and search for residents in distress.

“Our first priority is ensuring safety of lives," said Captain Eric King, the commander of USCG Sector San Juan.  "Following that, reopening the ports is a top priority, but we have to make sure we also do it safely. Opening the port prematurely could create a situation for a greater risk or incident, which could ultimately result in an even longer port closure."

Puerto Rico's population depends on regular shipments from the U.S. mainland for supplies. The port of San Juan was shut down in advance of the storm's arrival, and large merchant vessels were under orders from the Captain of the Port to depart. The terminal operations subsidiary of Crowley Maritime accelerated cargo processing in advance of the port closure to ensure that essential goods would be on store shelves.

Damage on the Dutch side of St. Martin

Irma has already flattened Barbuda, damaged buildings in St. Martin and flooded the U.S. Virgin Islands. The Category 5 storm is expected to head for Florida next, and the state is working fast to make preparations. Governor Rick Scott has declared a state of emergency and appealed for federal assistance, and he has called on all residents in vulnerable areas to have a plan and pay attention to local authorities’ evacuation orders. The Florida Keys and Miami-Dade County are evacuating areas in coastal areas, the Navy is evacuating 5,000 non-essential personnel from Naval Air Station Key West, and Brevard County has ordered the evacuation of Merritt Island. Gas shortages have been reported in many areas, and the state's attorney general has received over 1,500 reports of price-gouging for basic supplies.

Maritime operators have adapted rapidly to the shifting forecast for Florida. As of Thursday, every cruise voyage departing Florida's ports on Friday has been canceled. Half of the Saturday departures have been canceled as well, and Carnival Cruise Lines says that it is evaluating its Saturday and Sunday departures to determine what impact the storm will have.

On Thursday, the U.S. Coast Guard declared port condition X-Ray for Port Miami, Port Everglades and Port Canaveral – the busiest cruise ports in the world. While the ports remain open to traffic for now, the Captain of the Port warned that movement restrictions are likely beginning Friday. The COTP asked ocean-going merchant vessels and barges of 500 gross tons and over to make plans to depart, as these ports are not considered safe havens in the event of a severe storm.

The disruption could have a significant impact on the cruise industry. "Three of the busiest [cruise] ports in the world, and [this is] a storm that looks like it's going to run over all three of them," said Port Canaveral CEO Capt. John Murray, speaking to USA Today.  Canaveral Port Authority announced Thursday that it is complying with Brevard County’s evacuation order and will close all non-hurricane operations at midnight. The evacuation order applies beginning 1500 hours Friday for selected parts of the county.

In an update on Thursday, Port Everglades said that the Coast Guard has given it notice that port condition Yankee will be set Friday morning and port condition Zulu will be in effect on Friday night. Port Everglades spokeswoman Ellen Kennedy said that there are eight vessels in port, and all of them will have to leave by Friday morning. Cargo movements are slowing down, except for the petroleum trucks: Port Everglades handles one fifth of Florida’s energy needs, providing fuel to twelve counties and several major airports. With gas stations running low, the fuel terminals have been busy, Kennedy says.

But there is a limit: the port only has one product tanker offloading today, and it doesn’t expect to receive any more shipments before the storm. In addition, the tank farms can’t be fully emptied to keep Florida’s gas stations supplied. “The fuel storage tanks have to maintain a certain level or they would be damaged in the storm,” she says. “After it passes, they can draw down below that level and make more supplies available.” 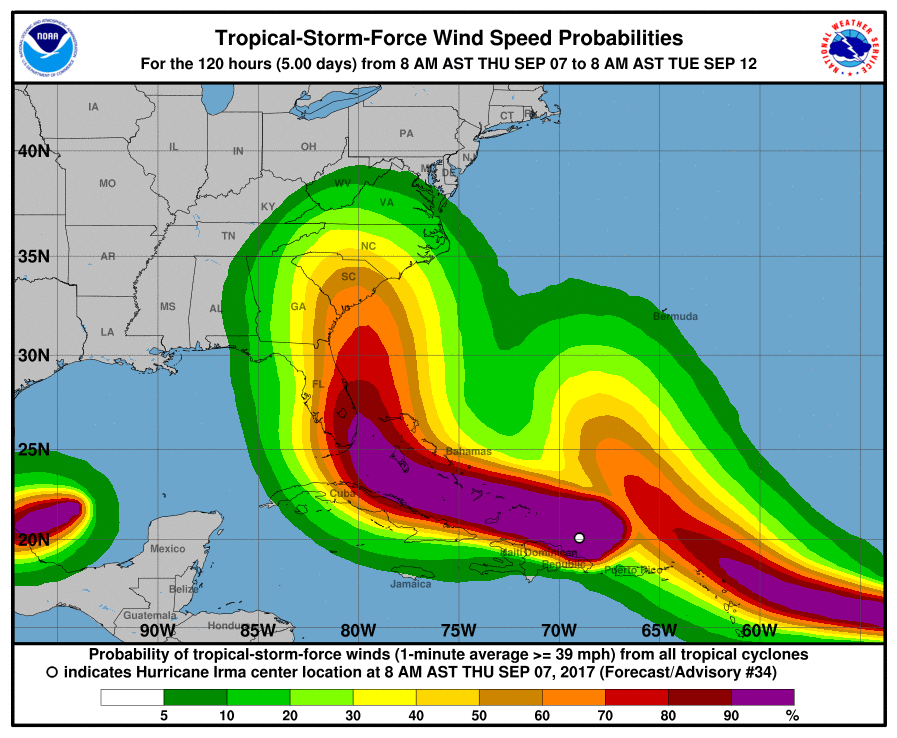