A German-owned heavy-lift cargo vessel has become the latest to be involved in the growing migrant crisis in the Mediterranean. Greek and Maltese rescue authorities worked with the cargo ship, but despite their efforts, a young girl died and several others are now reported to be in a hospital on Crete.

International NGOs and watchdog groups are calling attention to this latest case as another example of the failure to address the growing problem in the region. In this case, the migrants and refugees are believed to have set off from Tripoli in Lebanon, although many of the migrant cases involve people fleeing northern Africa, often from Libya. There is also another constant flow of migrants from Eastern Europe causing ongoing tension between Greece and Turkey.

In this latest instance, the NGOs are saying they believe the vessel was being ignored despite alerts that the small fishing boat was believed to be overloaded and in distress. One of the NGOs reported that a containership was following the fishing boat but did not approach to provide assistance.

On Tuesday, the BBC Pearl, a 14,400 dwt multipurpose heavy lift vessel managed by Briese Chartering came to the aid of the migrants. The vessel was transiting the Mediterranean on a voyage from Rotterdam bound for the Suez Canal when it came upon the fishing vessel which was believed to be disabled. Reports said the migrants had hoped to reach Italy but their boat had drifted west toward Malta after breaking down.

The cargo ship evacuated what turned out to be 63 people from the finishing boat. The NGOs believe they had been at sea for at least six days with reports coming from families in Lebanon that they had lost contact with the migrants. The heavy lift vessel was not designed to take 63 passengers aboard. According to a later report from the Hellenic Coast Guard it included 21 children, seven women, and 33 adult men. 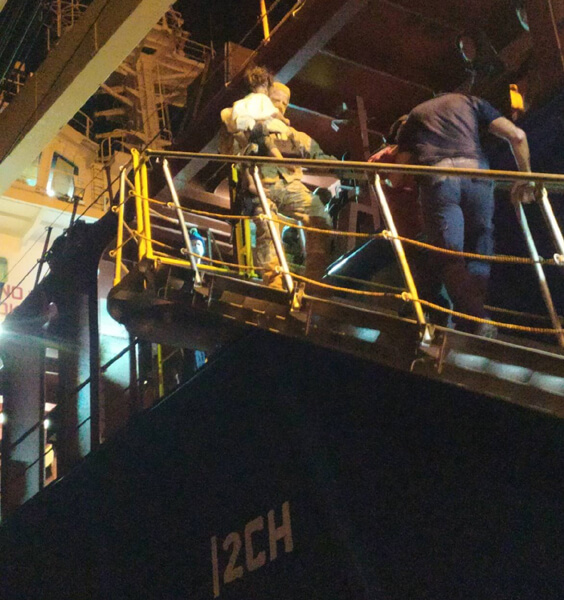 After rescuing the individuals, the BBC Pearl contacted the authorities in Malta at mid-day on Tuesday, September 6, requesting an emergency medical evacuation. They reported that a mother and her child, later determined to be a 4-year-old girl, were unconscious and required immediate attention.

The Hellenic Coast Guard was contacted and reports that while the vessel was still in Malta’s rescue zone, they agreed to assist. They told the BBC Pearl to divert from its course into Greek waters and the Hellenic Navy sent a helicopter. The vessel was approximately 50 nautical miles south of Crete when the medical team reached the BBC Pearl. The mother had regained consciousness and she and her child were airlifted to a hospital on Crete where the child was pronounced dead.

The Hellenic Coast Guard gave permission for the BBC Pearl to divert to Crete where she docked in the early hours of September 7. The 61 additional individuals, reported to be refugees from Lebanon and Syria as well as Palestinians, were disembarked in Crete. At least two were taken to the hospital.

It is the latest in a series of cases. Last week one of the NGOs reported that they had rescued over 460 people in a matter of hours in the Mediterranean. The organization SOS Mediterranee said that it is facing more distress cases than ever before and the medical situations are growing more serve.