The largest refinery in the U.S., the 600,000 bpd Saudi Aramco-Motiva facility in Port Arthur, Texas, is shutting down as Tropical Storm Harvey makes its second landfall in Louisiana. In addition, a power loss has taken Total's 200,000 bpd Port Arthur refinery down.

The closures bring the total refining capacity affected by the storm to about four million barrels per day, representing nearly one quarter of America's total. Analysts' estimates of actual output decline range between about 2.5 to 3.3 million bpd.

The water is crazy out here at #Motiva and it's still raining. #PortArthur #Harvey @12NewsNow pic.twitter.com/BuSd7NbsVB

Gasoline futures have risen to a two-year high on the back of reduced production, and crude oil prices have fallen on reduced American feedstock demand. Refining crack spreads have risen to the highest in a year and a half.

With margins high and consumption unabated, refiners in less-affected areas of Corpus Christi are looking to restart their operations as soon as possible. Valero has signaled that it intends to bring its Corpus Christi and Three Rivers refineries back online, and Flint Hills Resources intends to restart another; together, these facilities represent nearly one million bpd of capacity.

Port closures may complicate the effort to restore production. The affected refineries are dependent upon imports of heavy crude from abroad for their feedstock mixture.

Beaumont and Port Arthur, Texas received more than two feet of rain in 24 hours as Harvey made its second landfall. Port Arthur is downstream of Beaumont, and flooding on the coastal city may worsen as levels in Beaumont fall. 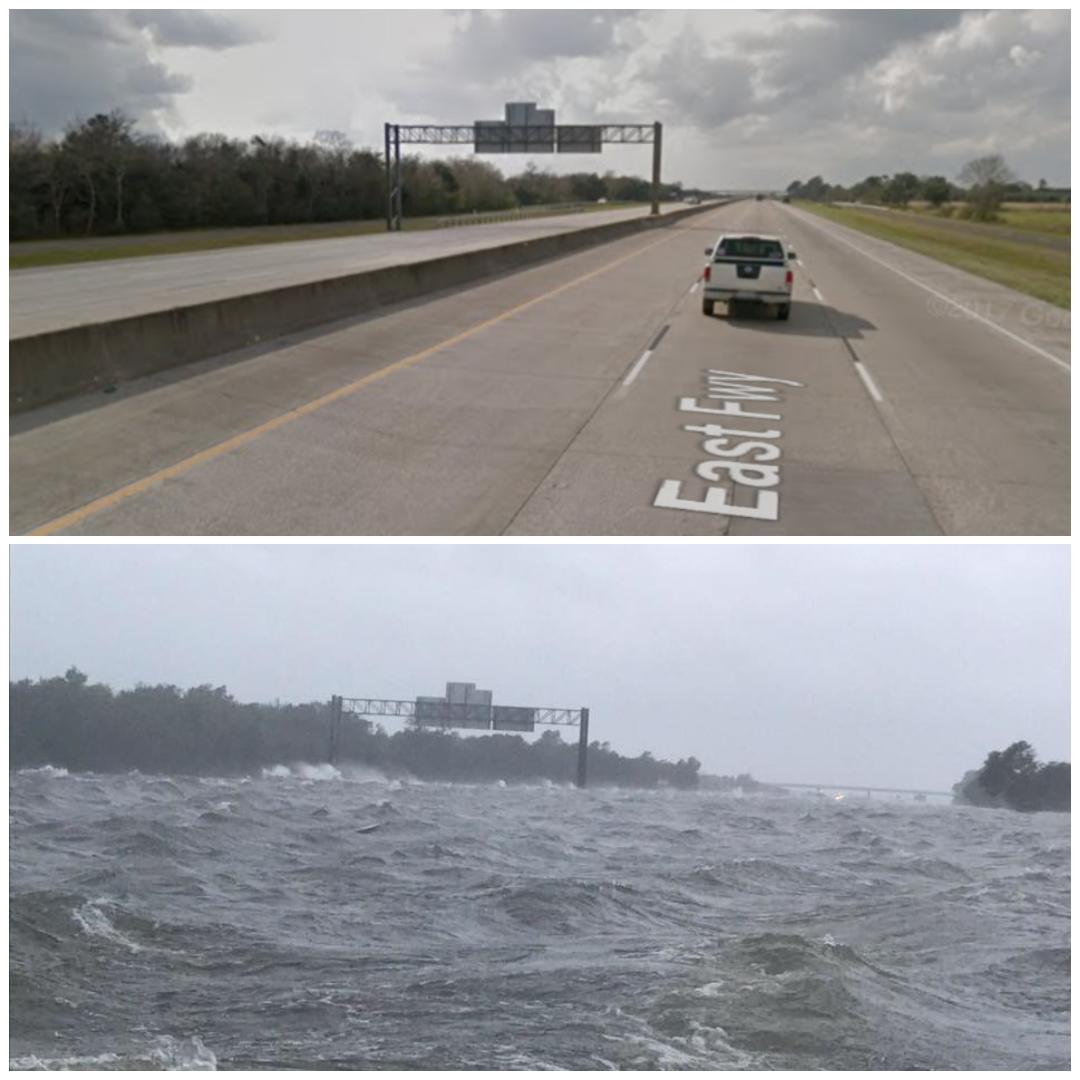 I-10 near Port Arthur, before and after Harvey (social media)

In a social media post Wednesday, Port Arthur Mayor Derrick Freeman said that "our whole city is underwater," and promised citizens that help was on the way. The city's police department said that volunteer rescue boats are "welcome in Port Arthur to assist emergency personnel."

Volunteers, flood victims and government first responders have made extensive use of Twitter and Facebook to coordinate the response. A deluge of online posts describe rally points, the location of victims, areas of hazardous conditions and the assets available to assist in SAR operations.

Airmen from the @nationalguardny 's @106thRescueWing rescue a one month old baby while assisting the Hurricane Harvey Response. pic.twitter.com/CbxBE8nUqa

The Coast Guard, Navy, Air Force, Army, Customs and Border Patrol and other agencies have redeployed assets from around the nation to assist with evacuations. The USCG now has 21 helicopters operating in greater Houston, and it estimates that it has rescued over 3,600 people to date.

The federal agencies have repeatedly emphasized that unlike the response to Hurricane Katrina in 2005, local and state officials are in control of the effort. A top-down response from FEMA and from military officials was widely blamed for a flawed disaster relief effort in New Orleans twelve years ago, and outside agencies say that they are keen to avoid a repeat of those mistakes.

Harvey is moving to the northeast over the Texas-Louisiana border, making about seven knots. It is gradually losing its intensity, with sustained winds now in the range of 40 knots. It will arrive over northwestern Mississippi on Thursday night and is expected to hold its general course through Friday. The Tennessee and Ohio Valleys will see rains in the range of two to four inches over the weekend, potentially leading to flooding.

A storm surge warning is in effect for stretches of the eastern Texas coast and western Louisiana, including two to four feet in the offshore hub of Morgan City. Life-threatening flood warnings are in effect from Houston and Beaumont/Port Arthur eastward into southwest Louisiana.

Waters begin to recede in Houston

As the storm passes east, the threat of heavy rain has ended in the flood-stricken Houston area, and high waters have begun to go down in some areas. The recovery ahead will be long and costly. Initial surveys in areas where Harvey made landfall show near-total devastation (video below).

A storm survey team from our office viewed this devastating damage from #HurricaneHarvey in Holiday Beach, #Texas yesterday #txwx pic.twitter.com/YIohAMfSFf

President Donald Trump has promised to work with Congress to come up with a sweeping, "costly" relief package. "You're going to see very rapid action from Congress – certainly from the President," he said in an address Tuesday night.

Trump has previously hinted at a government shutdown if Congress fails to fund his proposed wall at the Mexican border, and while he did not withdraw that threat, he indicated that the relief package would be a separate piece of legislation, not connected with the annual federal budget process. "It has nothing to do with it," he said.

FEMA has declined to give an estimate of its funding needs for the post-disaster recovery, suggesting that it is too early in the process to accurately estimate the cost. But the size and scope of the disaster is "unprecedented," according to the National Weather Service, setting a new record for rainfall from a tropical system in the lower 48 states and putting fully 30 percent of Houston's Harris County underwater. Private weather firm AccuWeather suggested that it could be the costliest disaster in American history, with up to $160 billion in damages.

Vice President Mike Pence acknowledged that the scope of the need would be tremendous. "We actually anticipate that as many as a half a million people in Texas will be eligible for and applying for financial disaster assistance, and we remain very confident that with the reserves and with the support in the Congress, we'll have the resources that we need," he said.

Note: the Federal Trade Commission warns donors to evaluate newly formed relief organizations before giving, as scams are common in the wake of a major disaster.

- Blood transfusion association AABB called on Americans in all states to donate blood to help boost the national supply. The storm has disrupted the normal pace of blood drives throughout the affected area, and making a donation of blood in any state will help offset a potential shortfall in Texas. For more information, click here.

- FEMA has called for volunteers to assist with the massive relief effort. To sign up, visit National Volunteer Organizations Active in Disaster (NVOAD) at https://www.nvoad.org/how-to-help/volunteering/

- USA.gov asks citizens not to “just show up,” but to join the effort by volunteering with a formal aid organization.

Many large corporations with operations on the Gulf Coast have also made contributions to the relief effort, and a tally puts the total at about $70 million – including $2 million from Carnival Corp. and the charitable foundation of its CEO, Micky Arison.

- The Captain of the Port, Sector Houston-Galveston expects to remain at Port Condition ZULU for at least the next 24 hours. Deep-water traffic may not start moving until Thursday, and possibly later.

- USCG Houston-Galveston Vessel Traffic Service hopes to get a Modified ZULU approved today, which would allow limited vessel movements within the port. [In an update midday Wednesday, the Coast Guard said that the request has been approved.]

- USCG Houston have salvage teams assisting with the sunken dry dock near Brady's Landing, and other sunken or missing equipment. All facilities must complete a post-storm assessment form and provide those to USCG before their terminals will be allowed to receive vessel traffic.

- The Port of Galveston is working to get the port ready to receive the cruise ships.

- The Port of Freeport is working to get ready to receive ships. Some traffic has already diverted. The terminal is in fair condition and roads are passable. Initial surveys by pilots have started.

- The Port of Texas City is working to get the port ready to receive traffic.

The Port of Corpus Christi remains closed due to a grounded drillship at the Port Aransas channel entrance.

- Texas A&M University at Galveston is now scheduled to reopen on Friday. Teachers and staff are expected to return to work tomorrow, and classes will begin for the fall semester on September 4.

- Last week, the Coast Guard successfully rescued 20 people from tugs and barges near Port Aransas as Hurricane Harvey made its first landfall. Reports from the area indicate that there are three sunken tugs and four fuel barges aground near a barge fleeting area in Lydia Ann Channel.