Global charity Mercy Ships is celebrating a key milestone this week as its new, state-of-the-art hospital ship Global Mercy made its first port call in Dakar, Senegal. Fifteen years in the making, the multi-million-dollar ship is completed its commissioning celebrating with African leaders and in a “passing of the torch” ceremony between the older Africa Mercy which has been fulfilling the charity’s mission since 2007.

The largest civilian hospital ship in the world, planning for the Global Mercy began as the team was completing the commission of a converted ferry that became the Africa Mercy. They asked themselves what the ideal hospital ship would include and began to shape the project which is now coming to fruition. On Monday, Senegalese President Macky Sall welcomed the Global Mercy at a ceremony attended by Guinea-Bissau President Umaro Sissoco Embalo and Comoros President Azali Assoumani.

Teams working aboard the Global Mercy are completing training and preparation for the new ship and will spend the next few weeks in Senegal working along with their sister ship. They plan to train 260 health professionals before the vessel departs for the Canary Islands, where it will complete its commissioning. Mercy Ships told the attendees at Monday’s ceremony that Global Mercy will return to Senegal in 2023. In the meantime, Africa Mercy will remain in Senegal supporting the community. 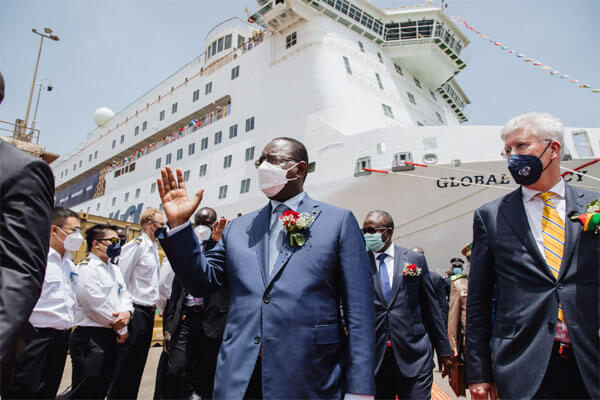 Stena RoRo which partners with Mercy Ships for the operation of the hospital ships reports that it used its experience in building and operating Ropax class ships to contribute to the construction of the Global Mercy. “Instead of a car deck, we’ve built operating rooms and hospital wards,” said Per Westling, CEO of Stena RoRo AB. “The ship will have space for about 950 persons with everything needed for both patients and those who work onboard, including grade schools and nursery schools for the children of staff.”

After completing sea trials in April 2021, the Global Mercy was handed over on June 16, 2021. It marked the culmination of six years of construction in northern China at the Tianjin Xingang shipyard of China State Shipbuilding Corporation (CSSC). The first steel for the hospital ship was cut in 2015 and assembly began in 2017. Global Mercy was floated for the first time in February 2018.

Registered in Malta, the Global Mercy is 570 feet long and 36,600 gross tons. The hospital department encompasses 7,000 square meters. It includes six specially designed operating rooms, 200 beds, a laboratory, and general outpatient clinics. In addition, it was outfitted to provide eye and dental care, women’s health services, and education on agriculture and nutrition.

The ship can accommodate 950 people when docked, including 641 crew members, who are made up of volunteers from all over the world. In addition to the hospital, the ship contains the latest training facilities. The vessel is powered by four Wartsila diesel engines and special design elements were incorporated as the vessel will remain alongside for longer periods of time.

The team at Mercy Ships noted there was excitement building as the Global Mercy arrived in Senegal preparing to fulfill her mission.