Despite global economic growth in 2015, worldwide emissions from fossil fuels are projected to decline by 0.6 percent this year.

A report released by the Global Carbon Project (GCP) has found that emissions of carbon dioxide in 2015 will break the rapid emissions growth of the past decade.

"The major contributor to this change has been decreased coal consumption in China", Executive-Director of the GCP and co-author of the report and Australian CSIRO researcher, Dr Pep Canadell says.

The report shows that Australia emitted over one percent of the world's total carbon emissions from fossil fuels, emitting 0.38 billion tons, making it the 14th largest contributor globally.

Australia's per capita emissions remain high but with a strong declining trend over the past six years.

Canadell said that the strongest decline in emissions was in the European Union, averaging 2.4 percent decrease per year in the past decade, although some of it was achieved by transferring carbon emissions to emerging economies.

Lead author and Stanford University Professor Rob Jackson added, "If India's emissions continue under the current trend they will match the EU's emissions before 2020."

"The largest uncertainty in future years is China's coal use. Stabilization, or reduction, in China's coal use might be sustainable since more than half of the growth in the country's energy consumption came from non-fossil fuel energy sources in 2014 and 2015," Canadell said.

"Most scenarios exceed the carbon budget for a 2°C warming target in the first half of this century, which then requires up to several billion tons of emissions to be removed from the atmosphere each year during the second half of the century," said Canadell.

"Our analysis shows that the required large scale deployment of emissions reducing technology, like biomass energy with carbon capture and storage, will be limited by biophysical and socioeconomic constraints."

This points to the need for higher ambition in decoupling economic growth from emissions growth if the two degree threshold were to be avoided."

The GCP 2015 report is underpinned by a full data and methods paper published in the journal Earth System Science Data, with two associated papers in the journal Nature Climate Change.

The graph below shows the annual carbon dioxide emissions from fossil fuels and industrial processes since 1990. 2014 saw slowed fossil fuel emissions growth and 2015 has a projected decline from the previous year. 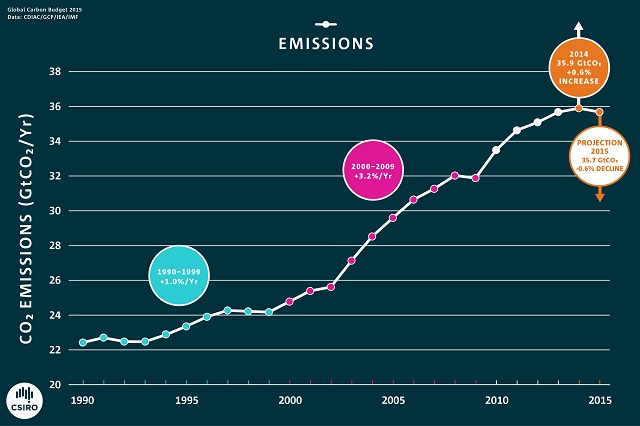