Fred. Olsen Cruise Lines, which markets trips in the U.K., is planning a second record transit in 2023 through the four-mile-long Corinth Canal in Greece, giving passengers what is being described as a once-in-a-lifetime experience. In 2019, the cruise line’s ship the Braemar made history when she became the largest ship to ever traverse the nearly 130-year-old canal with as little as two-and-a-half feet of clearance at the narrowest points in the passage.

The cruise line plans to give adventurers the chance to relive history aboard the Braemar with a repeat of its record-breaking transit of the Corinth Canal. The transit is scheduled for the morning of May 14, 2023. The nerve-racking voyage, which takes at least two years to plan, had originally been slated for April 2023.

“Our journey planners work hard to craft every cruise with the joy of the journey in mind, but this cruise offers a sailing experience like no other,” said Clare Ward, Director of Product and Customer Service for Fred. Olsen. “Here, Braemar will showcase exactly what we mean when we say ‘smaller is better,’ embarking on another record-breaking sailing of the Corinth Canal.”

During the 2019 transit, the ship was assisted by a tugboat to avoid bumps. However, with a 79-foot width at the narrowest point in the canal, the cruise ship had just feet of clearance on each side. Passengers on board were able to touch the walls of the canal at certain points. 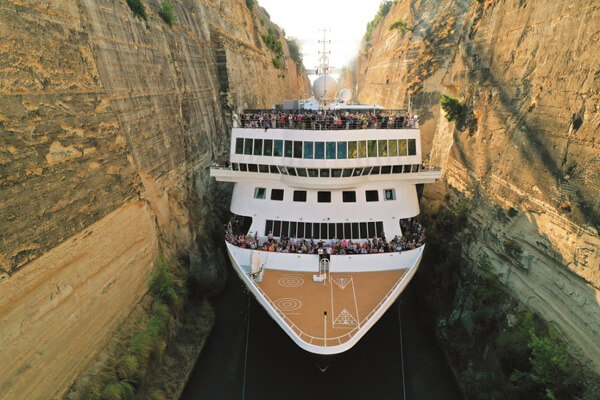 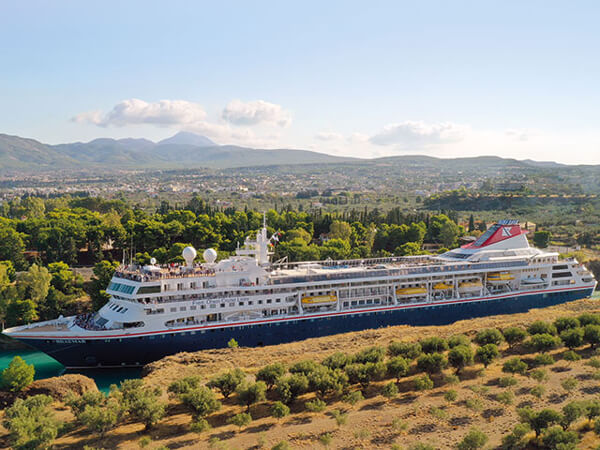 While ships have been navigating through the narrow waterways since 1893, the 24,344 gross ton Braemar, which is 642 feet long, exceeded the normal maximum dimensions of ships permitted to use the historic waterway. Traditionally, the authorities limit the canal to vessels with a beam under 58 feet. She has a draft of 17.9 feet, providing at points just eight feet of clearance under her keel.

Spanning a distance of four miles, the Corinth Canal has a depth of 26 feet and its width varies between a minimum of 69 feet at its bottom and a maximum of 82 feet at the surface. Surrounded by walls standing at a height of 170 feet, the canal which was carved from the rock helps ships reduce their journey by 185 nautical miles. The canal connects the Gulf of Corinth with the Saronic Gulf, separating the Peloponnese from mainland Greece.

In recent years, the canal has been losing its economic importance due to its inability to accommodate modern large vessels, a development that has prompted Greek authorities to explore expansion plans. It is estimated that around 15,000 ships, mainly small vessels, cruise ships, and yachts transit annually through the man-made canal.