France’s Oldest Sailing Ship to be Managed by V.Ships

In a shipping industry focused on the newest and the best ships, V.Ships France is taking a moment to turn back the clock and focus on the origins of the shipping industry. While the company recently assumed management of four new builds being outfitted with the latest technology including electronic engines dual fuel, the management company on May 17, also added France’s oldest sailing ship to its fleet.

Belem is a 500 ton three-masted bark. She is the last vessel of her kind in France and is recognized as a national historic landmark. She operated with 22 sails creating nearly 13,000 square feet of sail area. Under full sail she reported has a top speed of 11 to 12 knots, while she also has two modern diesel motors fitted in 2013 that provide a speed of 8 knots.

Measuring nearly 190 feet in length, Belem has had a checked history. Built in France, she made her maiden voyage as a cargo ship in 1896, sailing to the West Indies, Brazil and French Guinea from Nantes, France. She remained active as a cargo ship for 18 years and during that time had a number of notable voyages, including in 1902 she was anchored offshore at Martinique during the famous volcanic eruption that devastated ports of the island. 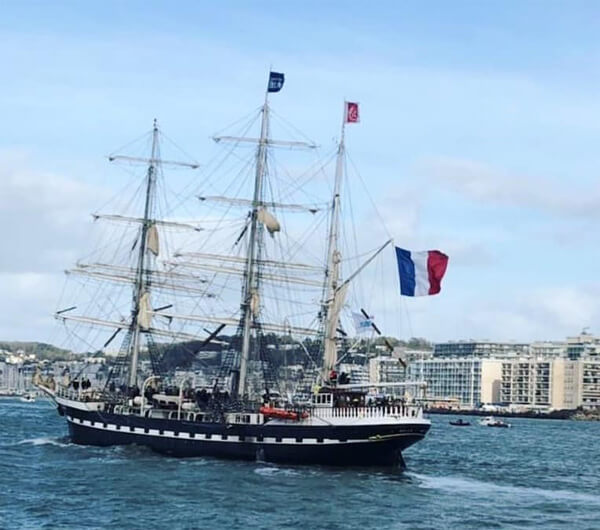 Since the 1980s, Belem has been operated by a foundation for sail training programs in France

In the 1950s and early 1960s, she began her new life as a sail training ship. However, in 1965 she was retired and spent 14 years idle considered too old for service. She was bought in 1979 by the French Bank Caisse d’Epargne, which created the “Foundation Belem” in 1980. Reconditions and returned to her original name of Belem she returned to service as a training ship. The foundation seeks to preserve the history and traditions of sailing ships teaching the art of sailing to new generations. Today, she operates with a crew of 16 professional sailors, along with 48 trainees, that manage all vessel operations.

“This project is a combination of maintaining this historic sailing vessel, as well as providing skilled and competent crew via our network,” explained Thierry Sarrazin, Managing Director of V.Ships France. “It embodies what the maritime industry is – a fantastic link between our present activities and the past of our honorable ancestors.”

In 1981, the Belem was classified as an Historical Monument by the French Administration. Currently, Belem sails from April to November each year as a training ship. V.Ship says that the vessel may also be used as a venue to organize seminars and team building sessions for shore and sea staff.