For the First Time, a U.S. Navy Carrier Deploys With a Female CO

On Monday, the USS Abraham Lincoln departed San Diego with her escorts, becoming the first nuclear-powered carrier to deploy under the leadership of a female commanding officer.

Capt. Amy Bauernschmidt, the first female carrier CO in Navy history, took command of Lincoln last August, relieving Capt. Walt "Sarge" Slaughter. Bauernschmidt was also the first woman to serve as the executive officer aboard an aircraft carrier, a position she held from September 2016 to January 2019 on board the Lincoln.

Bauernschmidt graduated from the United Stated Naval Academy in May 1994 - the first graduating class in which women were allowed to serve aboard combatant ships and aircraft. She was designated as a naval aviator in 1996 and served with several helicopter squadrons throughout her career, racking up more than 3,000 flight hours. She has previously commanded Helicopter Maritime Strike Squadron (HSM) 70 and the amphibious transport dock USS San Diego. 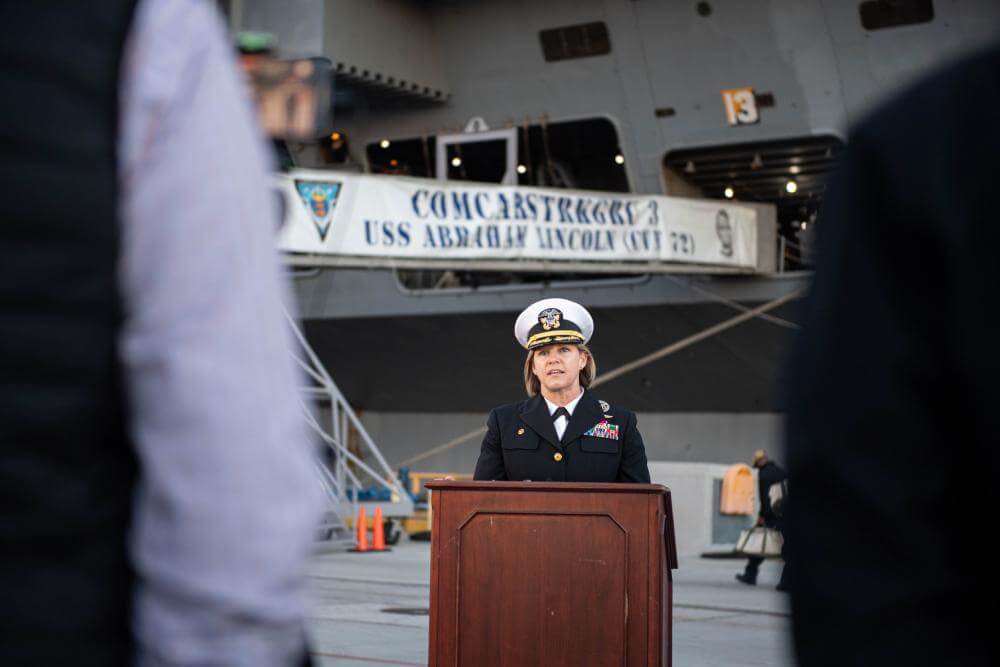 “[Lincoln's] sailors are incredible professionals who have trained exceptionally hard to ensure they are ready for any operational obligations required of us on deployment,” Bauernschmidt said in a statement Monday. “They are absolutely prepared for today’s deployment, and I have no doubt they will represent our nation proudly as we defend our national interests.”

For the first time, Lincoln is deploying with a squadron of Marine Corps F-35C fighers, bringing stealth technology to her air wing. It is the Marine Corps' first deployment aboard a U.S. Navy aircraft carrier with the F-35C, according to Major Zachary P. Hartnett (USMC).

Lincoln's last deployment was in 2019, and it turned into a marathon 295-day voyage - the longest for any carrier since the Vietnam War. She was dispatched to the Middle East as a deterrent to Iran in May 2019, remaining in the region until December. She spent the 2020-2021 pandemic in refit and training in San Diego.