A research team from Columbia Engineering in the U.S. has developed a novel photovoltaic-powered electrolysis device that can operate as a stand-alone platform that floats on open water. Electrolysis, the splitting of water into oxygen (O2) and hydrogen (H2) fuel, can be used as a way to convert electricity from the photovoltaics (PV) into storable hydrogen fuel.

The vast majority of today’s hydrogen is produced from natural gas through a process called steam methane reforming that simultaneously releases CO2, but water electrolysis using electricity from solar PV offers a promising route to produce H2 without any associated CO2 emissions.

Dr Daniel Esposito’s team have developed a device that they say can be thought of as a “solar fuels rig” that bears some resemblance to deep-sea oil rigs, except that it would produce hydrogen fuel from sunlight and water instead of extracting petroleum from beneath the sea floor. 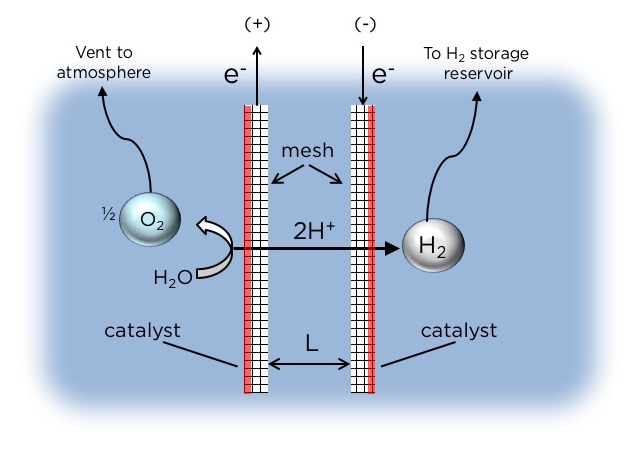 The researchers’ key innovation is the method by which they separate the H2 and O2 gases produced by water electrolysis. State-of-the-art electrolyzers use expensive membranes to maintain separation of these two gases. The Columbia Engineering device relies instead on a novel electrode configuration that allows the gases to be separated and collected using the buoyancy of bubbles in water. The design enables efficient operation with high product purity and without actively pumping the electrolyte. Based on the concept of buoyancy-induced separation, the simple electrolyzer architecture produces H2 with purity as high as 99 percent. 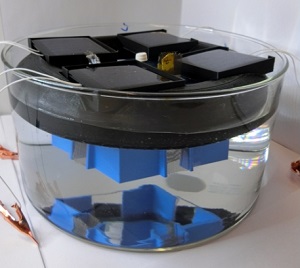 Commercial electrolyzers rely on a membrane, or divider, to separate the electrodes within the device from which H2 and O2 gas are produced. Most of the research for electrolysis devices has been focused on devices that incorporate a membrane. These membranes and dividers are prone to degradation and failure and require a high purity water source. Seawater contains impurities and microorganisms that can easily destroy these membranes.

Crucial to the operation of Esposito’s PV-electrolyzer is a novel electrode configuration comprising mesh flow-through electrodes that are coated with a catalyst only on one side. These asymmetric electrodes promote the evolution of gaseous H2 and O2 products on only the outer surfaces of the electrodes where the catalysts have been deposited. When the growing H2 and O2 bubbles become large enough, their buoyancy causes them to detach from the electrode surfaces and float upwards into separate overhead collection chambers.

The team is refining their design for more efficient operation in real seawater, which poses additional challenges compared to the more ideal aqueous electrolytes used in their laboratory studies. They also plan to develop modular designs that they can use to build larger, scaled-up systems.