The first tanker carrying LNG from the United States arrived in Wilhelmshaven on January 3 being hailed as Germany’s next step in greater energy security. The shipment comes as the United States emerged as one of the world’s largest exporters of LNG and just months after the German federal government launched its efforts to develop LNG import terminals using chartered FSRU vessels. The arrival of the first shipment however is being met by environmental protestors.

The Maria Energy, a 93,300 dwt gas carrier owned by Tsakos Energy Navigation, docked with the H?egh Esperanza, the first of five FSRUs chartered by the German government which arrived in Wilhelmshaven in mid-December. The gas carrier was completing a trip that began at the U.S. terminal in Calcasieu Pass, Louisiana, loading approximately 170,000 cbm of LNG and departing on December 19. Venture Global supplied the LNG to the terminal which is being operated by Uniper. According to the companies, this shipment will provide enough gas to fuel 50,000 German homes for up to one year.

Testing at the Wilhelmshaven terminal is still underway with Uniper saying full commercial operations are expected by mid-January. The first shipment of gas, approximately 160,000 cbm, arrived aboard the H?egh Esperanza and was regasified and fed into the existing transmission network. 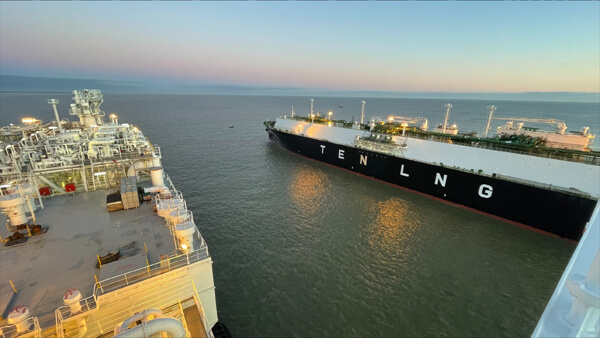 While the focus remains on ensuring that everything is working as intended, Uniper also reports that the next tanker should arrive next week. German police escorted the tanker into the port after reports that environmental groups were planning protests over the arrival of the vessel.

“The fact that Germany is buying fracking gas directly from the USA for the first time today is no reason to be happy,” said Sascha Müller-Kraenner, Federal Director of the German Environmental Aid (Deutsche Umwelthilfe - DUH), in a statement. The group is highlighting the use of the controversial fracking method of gas extraction in the United States noting that it is banned in Germany and elsewhere as well as the controversy over methane slip. “We are therefore calling for a pause for thought in terms of LNG infrastructure, to clarify substantial questions about demand and origin of the gas. Instead of creating massive LNG overcapacities and concluding long-term supply contracts with dubious sources, Germany must push ahead with the expansion of renewable energies and save even more energy.”

A warmer than average December the groups highlight has permitted Germany to build up large gas reserves. Germany’s annual consumption of gas is estimated at around 90 billion cubic meters according to Bloomberg. The country’s gas reserves have surpassed 90 percent providing comfort that they should be able to meet demand despite the efforts to reduce or end imports from Russia.

In 2022, the United States emerged as one of the world’s largest exporters of gas just six years after LNG exports started from the Gulf of Mexico. Bloomberg calculates that the U.S. tied Qatar in 2022 as the largest exporter with each country shipping approximately 81 million tons of LNG. They contend that if the Freeport LNG had not been taken offline by the June 2022 explosion, the U.S. would have been the world’s largest exporter. Freeport LNG now expects to start resuming operations later this month.

The German government launched its efforts to establish the LNG import terminals shortly after the Russian invasion of Ukraine completing the first agreements in May 2022. In addition to the FSRU in Wilhelmshaven a second government-chartered vessel is preparing to begin operations in Brünsbuttel near Hamburg as well as the privately-funded terminal at Lubmin which is currently also testing its operations.