Greece is welcoming back its first large cruise ship this week. During the summer the tourism minister had promised to reopen the country’s largest cruise ports but clusters of the virus and travel restrictions had delayed the resumption of the large cruise ships.

Starting this week, Germany’s TUI Cruises became the first large cruise company to base a ship in Greece for week-long cruises. The company’s vessel the Mein Schiff 6 arrived in Heraklion on Crete on September 11 and sailed two days later on its week-long cruise. It made port calls this week in Piraeus for tours to Athens and at Corfu. The cruise also includes three days at sea before returning to Crete.

Keeping with a similar pattern to the other large cruise ships that have resumed service, passengers are only permitted to go ashore on the cruise line’s organized tours. TUI developed a comprehensive shore program including for example visits to the historic spots in Athens as well as beach excursions on Corfu. Passengers use vehicles that have been disinfected and remain with their small groups.

Because of the continuing travel restrictions, TUI is offering the cruises as a complete package. They are bringing passengers to Crete aboard specially chartered airplanes. TUI is also arranging for the passengers to transfer to the ship on disinfected buses. Because the cruises include the air travel, TUI is having passengers take COVID-19 tests before leaving home for the cruise but it is covering the cost of those tests. They noted that they are not accepting passengers who wish to make independent travel arrangements to reach the ship in Heraklion

Built in 2017, the 98,800 gross ton ship has a normal passenger capacity of 2,534. According to local media reports, the vessel is carrying approximately 700 passengers on its first cruise in Greece. 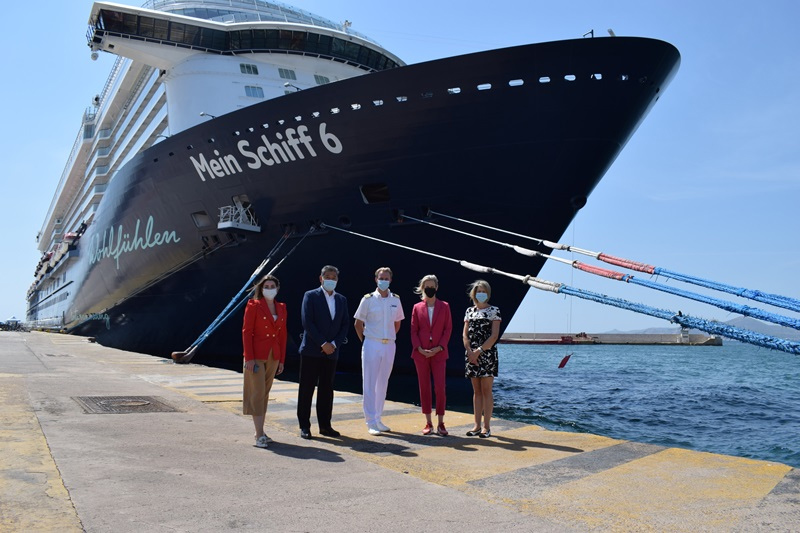 The introduction of the Greek cruise program follows TUI’s successful resumption of cruises during the summer from Germany. Two of its ships, the Mein Schiff 1 and Mein Schiff 2, continue to offer short sea trips which the company is calling Blue Journeys from Germany. Due to travel restrictions, they are sea voyages mostly spent in the Baltic. The company had hoped that some of the Scandinavian ports might accept the ships this fall but so far they have been limited to only scenic cruising.

While TUI was the first cruise line to return to Greece others hope to follow shortly. Costa Cruises announced plans to send one of its ships to Greek ports tentative at the end of the month. MSC Cruises had announced Eastern Mediterranean cruises departing from the Italian ports of Bari and Trieste but was twice forced to delay the restart. They blamed low bookings due in part to the travel restrictions. Recently MSC announced they would be reworking the program repositioning the ship to the ports on Italy’s western coast but plan to include a mix of Italian and Greek ports on a longer cruise. TUI's competitor AIDA Cruises has been forced to delay several planned restarts but now hopes to begin cruising in October at first only to Italian ports but to later add Greece to its itineraries.

The North American cruise executives are reported to be carefully following the progress of the Mein Schiff program, which is partially owned by the Royal Caribbean Group in partnership with TUI. They believe the success of these first cruises will provide a model for the resumption of cruising in North America later this year.