An ambitious plan to restore the former iconic presidential yacht USS Sequoia is finally expected to get underway by next spring nearly four years behind schedule. Once the private retreat for U.S. presidents and used to host diplomatic and political functions, the vessel is currently sitting in a parking lot covered with boat wrap in Belfast, Maine.

The yacht, also commonly referred to as a “Floating White House” that served eight U.S. presidents including Franklin D. Roosevelt and John F. Kennedy was carefully loaded onto a barge and moved from Virginia to Maine in October 2019. Custom boat builder French & Webb was hired by the vessel’s owners to undertake a painstaking restoration of the famous yacht which when built in 1925 was one of the largest personal yachts in the world. 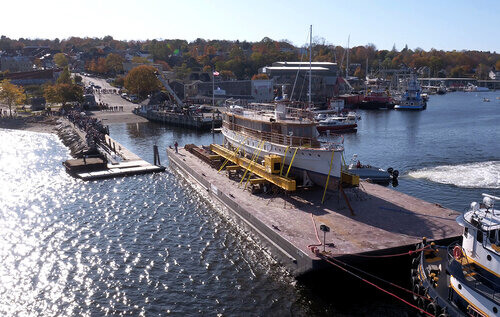 Arriving in Maine in 2019 for the restoration (French & Webb photo)

“It’s slowly happening, but the needle is moving. As much as it’s a bit of an eyesore on the waterfront right now, it’s here, it’s protected — and it’s going to happen,” Todd French, the owner of French & Webb, told the Bangor Daily News last week.

He added that although little work has been done on the yacht, a lot has happened behind the scenes in preparation for the physical restoration work. He told the newspaper that preparation work included using modern laser technology to make a full, three-dimensional model of the boat and sourcing rare wood and materials in environmentally sensitive ways.

Designed by Norwegian-born naval architect John Trumpy, the vessel was built by the Mathis Shipyard in New Jersey for Emily Roebling Cadwalader, heiress to the engineering family that built the Brooklyn Bridge in New York. Six years later, the yacht was acquired by the U.S. Government initially used as a decoy to capture bootleggers illegally smuggling then outlawed alcohol but quickly adopted by President Hebert Hoover to become the new presidential yacht. Measuring 104 feet in length, her shallow draft made her ideal for presidents because she could navigate the Potomac River to reach Washington, D.C. 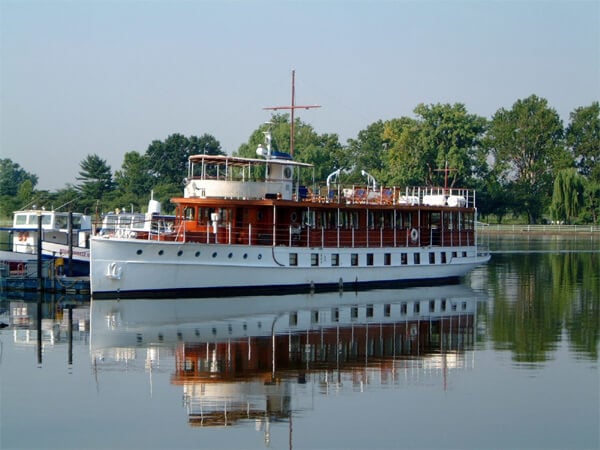 During its heyday, Sequoia served eight presidents from Herbert Hoover to Gerald Ford before she was sold by President Jimmy Carter in 1977 in a cost-cutting move designed to end what he called the era of the “imperial presidency.” Some of the yacht’s memorable events included frequent trips by presidents from Roosevelt to Richard Nixon, Harry Truman holding atomic arms talks with the leaders of Canada and Great Britain after World War II, and Lyndon Johnson who wined and dined political leaders while seeking support for his legislative agenda. Roosevelt hosted British Prime Minister Winston Churchill and Nixon met with Soviet leader Leonid Brezhnev aboard the ship. Presidents also used the yacht as a personal escape, including John Kennedy celebrating his last birthday aboard and Nixon playing the piano as the Watergate scandal unfolded.

Following its sale by the U.S. Government, the yacht became a tourist charter boat on the Potomac River but changed ownership several times. In 1987, it was designated as a National Historic Landmark. She became caught in a protracted legal battle in the early 2010s before a judge final resolved the dispute in 2016 in a favor of a private equity group backed by Indian investors. Three year’s later she arrived in Maine for the restoration.

The work is anticipated to take three years. When the restoration is complete, the Sequoia is expected to return to Washington where it will be used as a floating venue that supports ocean conservation causes and as an American presidential teaching center.