Evergreen Containership Aground Near Baltimore

One of Evergreen Marine’s large containerships, the 12,118 TEU Ever Forward grounded overnight on the Chesapeake Bay shortly after departing Baltimore, Maryland bound for Norfolk, Virginia. The U.S. Coast Guard Fifth District reports that the vessel remains aground while they are coordinating with the shipowner to refloat the vessel.

The 1,095 foot Ever Forward, built in 2020, departed Baltimore with AIS data showing it was traveling between 8 and 13 knots. The vessel was proceeding with a pilot aboard. The Coast Guard reports that it was informed around 9:00 p.m. March 13 that the vessel was aground off Gibson Island in the Craighill Channel.

Local experts on the Chesapeake Bay are suggesting that the vessel is outside the channel possibly having missed a turn. Captain Matt Benehoff of the Annapolis School of Seamanship visited the site and in a video on social media highlights the channel markers. They are reporting that the low water in the area averages 24 feet and the vessel normally draws 42 feet. Pictures show the vessel heavily loaded.

The U.S. Coast Guard confirms that there is no pollution or apparent damage to the vessel but they are continuing to monitor. They are also investigating if there was a mechanical failure. The Coast Guard confirmed the ship is outside the main shipping channel and is not a hazard to other marine interests.

Tugboats from nearby Baltimore have been dispatched and can be seen at the vessel from the local TV channel helicopter views of the area and the grounding. Coast Guard personnel are on the scene assessing the situation to try and determine the best way to refloat the vessel.

Everyone remembers that just a year ago another of Evergreen Marine’s containerships, the larger Ever Given, became stuck in the Suez Canal. Traffic was blocked for six days and the vessel remained in Egypt for weeks while claims were settled. Last fall, she went into drydock in the Far East to repair damage from the grounding and the effort to refloat the containership. 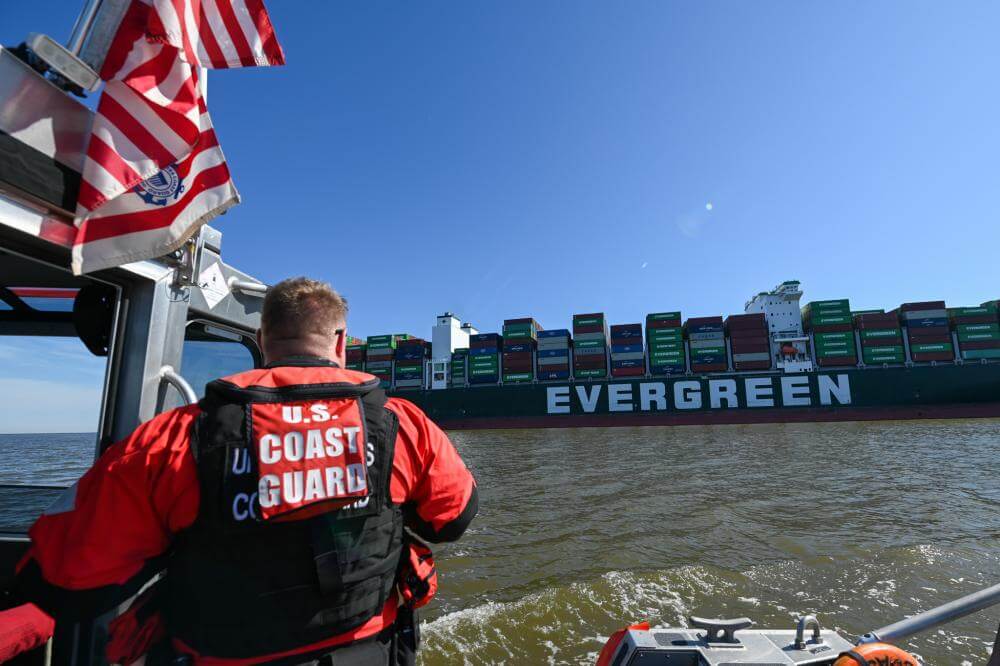 U.S. Coast Guard teams are surveying the Ever Forward aground in the Chesapeake Bay (US Coast Guard 5th District photo)