The Esvagt Njord, an SOV ship that services the Equinor operations in the Great Yarmouth area off the English east coast, was on regular service when she heard a distress call from a fishing vessel. The fast action of the crew aboard the SOV, assisted by some of the workers they were transporting for their customers out to the fields, rescued seven injured fishermen.

Esvagt reports that the vessel was operating close to the Dudgeon Offshore Wind Farm on December 22 when it heard a fishing vessel nearby calling for help. The captain of the Esvagt Njord responded to the message, and when he called the ship on the radio, he was told that the fishing boat was taking on water.

"The fishing vessel had not called Mayday, but we thought there was a need for help close by,” said Brian Kristiansen. “That is why we sent our Fast Rescue Boat (FRB) in the direction of the ship to be on standby and ready to assist.”

When the Esvagt Njord’s rescue boat located the fishing vessel, the captain said it was clear that a serious accident had taken place. The crew believed that there had been several explosions on board, and all seven fishermen needed help. Several were seriously injured.

"When the FRB contacted us and told us that the situation was serious, Equinor's medic happened to be standing on the bridge,” said Kristiansen. “He could hear over the radio that one of the injured was screaming in pain. Therefore, the medic immediately offered to assist us in providing first aid.” At the same time, Equinor, Certex, and Siemens Gamesa, which also has people on board the Esvagt Njord, also offered to assist.

The Esvagt Njord sent its larger Safe Transfer Boat (STB7) to the scene to help evacuate the fishing boat while the crew aboard the SOV prepared to receive the injured.

"All seven fishermen were seriously injured. Unfortunately, there were several fractures, tears, and wounds - there was not one of them that did not need help, so it was really good to be able to upgrade our preparedness with the support from the others on board,” said Kristiansen. 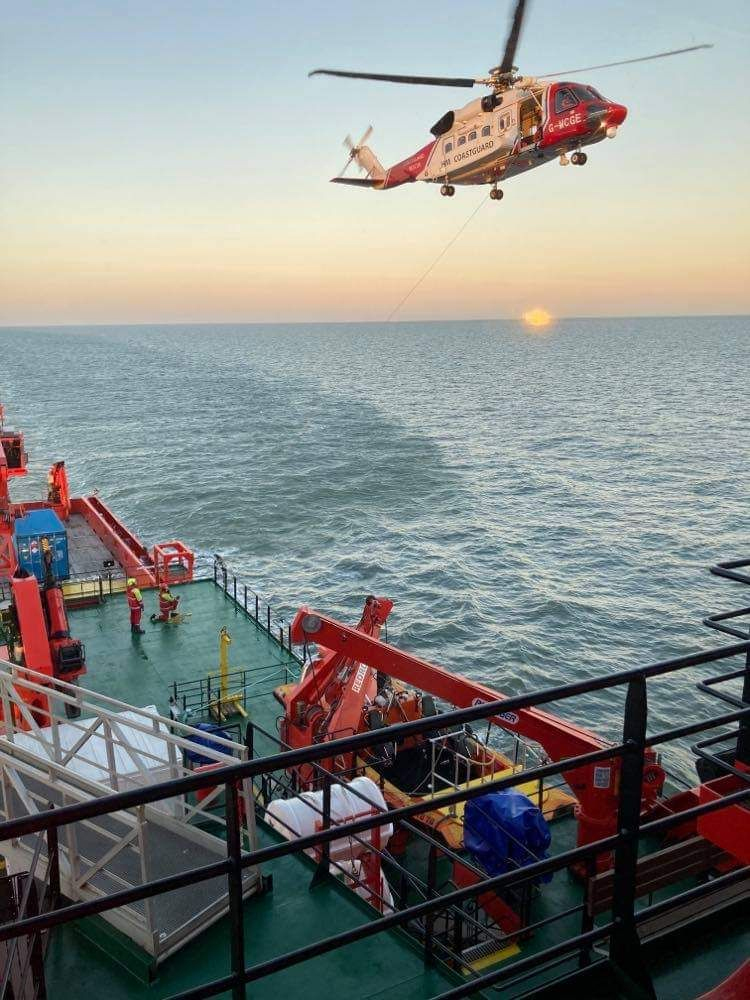 When the full extent of the injuries became clear, the SOV also raided for assistance from HM Coast Guard. Three people rescued from the fishing boat were so badly injured that the coast guard decided to evacuate them by helicopter.

ESVAGT’s Deputy CEO Kristian Ole Jakobsen hailed the efforts of the crew and said they were proud to be a crucial difference and ensure a happy outcome in a very difficult situation at sea. Since 1981, ESVAGT reports that it has rescued 148 people from life-threatening situations at sea.