Erik was a consummate businessman who loved his work with absolute passion. He joined his father Hans at Hvide Marine in 1970 and went on to become its President in 1981, CEO in 1991, and Chairman in 1994. Under Erik’s leadership, the company grew from a small family tugboat operation into a global shipping company with offshore and harbor tugs, offshore supply vessels, and chemical tankers.

He led the company in an Initial Public Offering in 1996, raising $1.5 billion in capital and grew the company from 23 vessels to one of the world’s leading providers of global marine support services with a fleet of 273 ships, 2500 employees, operations in 20 countries around the globe, and revenues of $400 million.

Hailed by Maritime Executive as an “unquestionably innovative, undoubtedly brilliant” leader in the maritime industry, Erik invented the revolutionary Catug tanker and the SDM tugboat for which he holds two patents in vessel design. 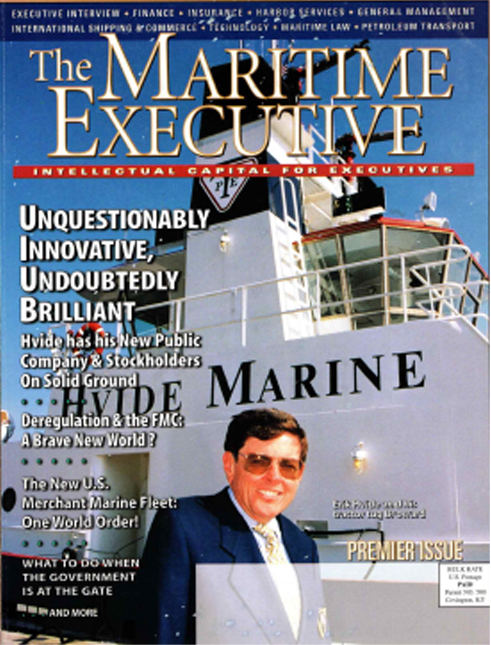 Erik was a man who spent his life defying odds. He possessed the stubborn determination of a true Viking. Erik, at seven, was diagnosed with polio, and his doctors said he would not survive, but he did. The doctors said that he would never get out of an iron lung, but he did, and they said that he would never get out of a wheelchair, but he did. Erik went on to become a varsity golfer at Saint Andrew’s High School in Boca Raton, where he graduated in 1965.

Erik went on to the University of Miami, where he was President of Alpha Kappa Psi business fraternity, a member of ODK, the highest national leadership and academic fellowship, and graduated in 1970 with a BBA. He went through Havard by a continuing education program.

He married his sweetheart, Betsy, in the Chapel of Saint Andrew in Boca Raton on May 29, 1971, and they had two sons: Leif-Erik and Johan Anders. His parents and sister, Elsa, predecease him.

His professional achievements include induction into the International Maritime Hall of Fame, Master Entrepreneur of the Year by Ernst and Young, International Executive of the Year by the Ft Lauderdale Chamber of Commerce, Congressional Appointee to the U.S. Coast Guard, Counsel Member of the American Bureau of Shipping and board member of various industry, corporate, and bank boards.

Erik also loved to serve his local and religious communities, having served for various parishes in South Florida as well as having lobbied the State of Florida to protect the natural tree corridor along A1A in Gulf Stream and was made Mayor for the day.

He was a member of the Gulf Stream B&T, Lauderdale Yacht Club, RPY&CC, Country Club of Florida, and Cat Cay Yacht Club, where he spent many years at his home Manor House.

Erik is and always will be a giant among men. But his most significant accomplishments were not the ones that made the papers but rather the quiet ones he shared with friends and family.