Enchanted Princess, the fifth Princess Cruises Royal-class ship has been floated out at Fincantieri’s shipyard in Monfalcone. Interior fittings will now begin, leading the vessel to its delivery, scheduled in 2020.

The partnership between the Monfalcone yard and Princess Cruises will continue with two next-generation cruise ships. These will be the largest built so far in Italy with a gross-tonnage of 175,000 tons, expected to be delivered at the end of 2023 and in spring 2025. The vessels will accommodate approximately 4,300 guests and will be the first of the ship owner’s fleet to be dual-fuel powered primarily by LNG. 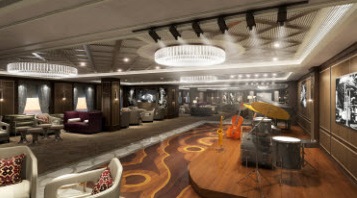 Princess Cruises has announced its two newest ships, the 3,660-guest Sky Princess and Enchanted Princess, will feature a new jazz lounge, “Take 5.” Opening on Sky Princess when she launches in October 2019 and Enchanted Princess in June 2020 in Southampton, Take 5 will be the only jazz theater at sea, says the cruise line. Guests can listen to live performances, enjoy after-hours parties and take part in dance lessons.

Fincantieri has built 92 cruise ships since 1990 (of which 66 ships are for Carnival Corporation and 16 ships for Princess Cruises), and another 54 ships are currently being designed or built in the Group's yards.