A fully-electric ferry built to demonstrate the potential for electrically-powered ships has set a new world record. According to Danfoss Editron, which supplied the electric drivetrains and propulsion motors, the ferry Ellen set a distance record for the longest voyage on a single battery charge.

"Ellen is an excellent example of the future for electric transport. It's cleaner, greener, and more efficient than her fossil fuel competitors,” said Kimmo Rauma, Vice President of Danfoss' Editron division. “Electrifying maritime transport is a clear-cut way to reduce greenhouse gas emissions."

The ferry which normally operates on a 22-nautical mile route in the southern islands of Denmark, made the special trip to be on display at the 7th Annual Global Conference on Energy Efficiency sponsored by the International Energy Agency (IEA). She sailed to the conference in Sønderborg, Denmark, where leaders from industry, government, and business were meeting.

“On her return from the conference, Ellen sailed 50 nautical miles – 92 kilometers – on a single battery charge,” reported Danfoss. The company is so proud of the achievement that they plan to submit it to Guinness World of Records. 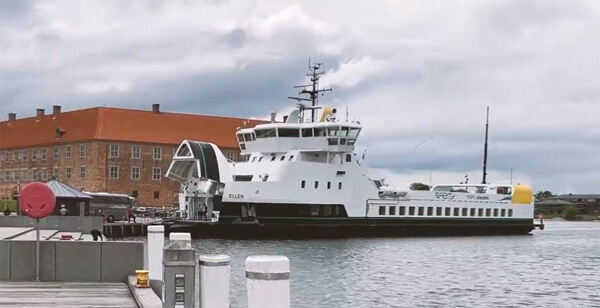 The ferry was designed for long-range travel and built as a prototype under an EU-sponsored program. With a 4.3 MWh battery pack, the company calls the vessel the world’s most powerful e-ferry and she also operates without an emergency backup generator. According to Danfoss, the vessel is 87 percent energy efficient from the power grid to the propeller. The electric ferry uses half the normal energy required to operate a standard ferry and Danfoss says it operates with a 24 percent lower cost than a new diesel ferry.

The Ellen is 195 feet long and operated by a crew of three. It sails at a speed of approximately 12 knots and can carry up to 200 passengers as well as approximately 30 cars or three trucks. She was launched in 2019, and in her first 10 months of operations, she completed approximately 1,000 round trips.

The company estimates that there is the potential for 900 ferries in Europe that could be replaced by the same type of e-ferry as the Ellen.