The U.S. Energy Information Administration (EIA) predicts that the share of high sulfur residual fuel oil consumed as bunker in the U.S. will drop from 58 percent in 2019 to three percent in 2020, and then rebounds to 24 percent in 2022.

The report, The Effects of Changes to Marine Fuel Sulfur Limits in 2020 on Energy Markets, indicates that despite a recent increase in scrubber installation and orders, the number of vessels installed with scrubbers required to continue using high sulfur residual fuel oil remains limited. As a result, a large but brief increase in the share of distillate fuel oil and low-sulfur residual fuel oil is predicted in 2019 and shortly after 2020. 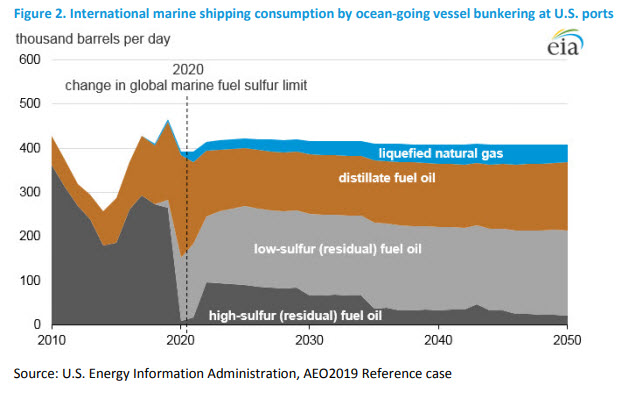 A recovery in high sulfur residual fuel oil consumption driven by scrubber installations is not expected to occur until 2022 but at levels far lower than before the 2020 IMO sulfur cap.

COVID-19 is a disease transmitted by respiratory droplets that spread during social interactions or when sharing close quarters with individuals who may be either symptomatic or asymptomatic. Vessel owners may have liability to their employees who become ill in the service of the ship. Vessel owners may also have obligations to third-party visitors and passengers. What Remedies Are Available When an Employee or a Third Party Becomes Ill While on a Vessel? The crew of a vessel have several remedies when...