Since restrictions on American crude exports were lifted in December 2015, outbound oil shipments from the Gulf have been booming. However, Gulf Coast petroleum ports have been calling attention to the limits that shallow harbors impose on shipment volumes. None of the waterfront terminals in the U.S. Gulf of Mexico can accommodate a fully laden VLCC, the largest and most cost-effective class of dirty tankers. While exports are now averaging more than 1.5 million barrels per week - triple the level in 2016 - the growth has been achieved using smaller ships and at-sea lightering, and an inability to load bigger tankers could slow the export market's expansion.

In a new report, the Energy Information Administration (EIA) provides a detailed look at how these restrictions affect the industry. At present, VLCCs departing the Gulf Coast use partial loadings or ship-to-ship lightering, according to EIA. These transfers take place in designated lightering zones and points off the coast of many of the largest U.S. petroleum ports. While the Maritime Administration does not have data on tanker ports of call for the period after export restrictions were lifted, the agency's numbers for the Gulf in 2015 show that lightering zones topped the list: Southtex Lightering Zone off Corpus Christi was the second-most-popular destination and South Sabine Point off Port Arthur came in first. 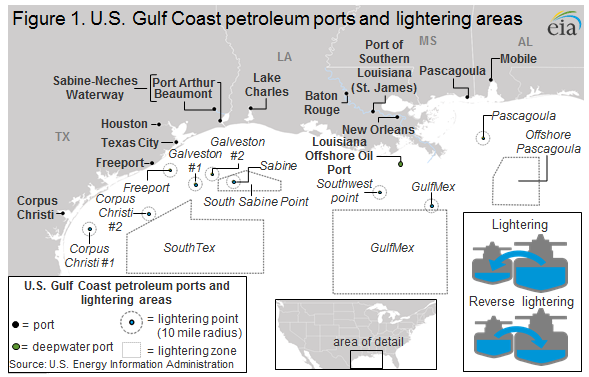 The inability to fully load larger and more cost-effective vessels has price implications for U.S. crude oil exports, EAI said. Higher shipping costs due to partial loadings, lightering and reduced shipment size mean that a bigger price difference between foreign and domestic crude is needed to export oil at a profit. The costs associated with a smaller tanker are less of a factor for exports over shorter distances within the Atlantic basin, but they are magnified for long-haul shipments to Asia. As Asian markets are a growing share of total U.S. crude oil exports, these costs will grow in importance, EIA predicts.

One American terminal - the Louisiana Offshore Oil Port - can fully load a VLCC, and its new export operations are having a positive effect on outbound volumes. However, it does not have access to production from the Permian Basin and the Eagle Ford shale in Texas, two important sources of volume growth. Corpus Christi, however, has ready access to that production, and has plans in the works for VLCC-capable loading facilities.