Dutch authorities reported finding additional narcotics hidden aboard a Liberian registered bulk carrier that had been at the center of an earlier bust and commando-style raid in France at the beginning of October. The latest discovery comes as Dutch and international authorities are reporting an increasing number of interdictions aboard vessels.

The story of the hapless 30,790 dwt bulker Trudy emerged in early October when French authorities celebrated a record seizure of more than a ton of cocaine. Working with international law enforcement, France captured the bulker when it entered the English Channel and took it to the port of Dunkirk on October 1.  A search of the vessel revealed 40 large cases containing a white power that was later confirmed to be cocaine. The crew was detained but the vessel was released pending the arrival of a replacement crew.

Before the bulker could depart France, it was stormed by a group of approximately 10 armed intruders. The replacement crew aboard the Trudy was taken captive while the master of the vessel was made to escort the gang as they searched the ship. Local police reported that the gang acted threateningly to the replacement crew, but left the vessel after about four hours.

The Trudy sailed for Antwerp with the assumption that the incident was over. However, at the beginning of last week, when the vessel docked in Rotterdam, Dutch authorities again performed their standard search of a vessel. During that sweep of the Trudy, they reported finding an additional 29 large cases each containing approximately 10 packs each of about one kilo in size. They also discovered one nine kilo block and 46 smaller packages. In total, an additional 529 kilos of cocaine were removed from the Trudy. The estimated value of the latest seizure was over $46 million. 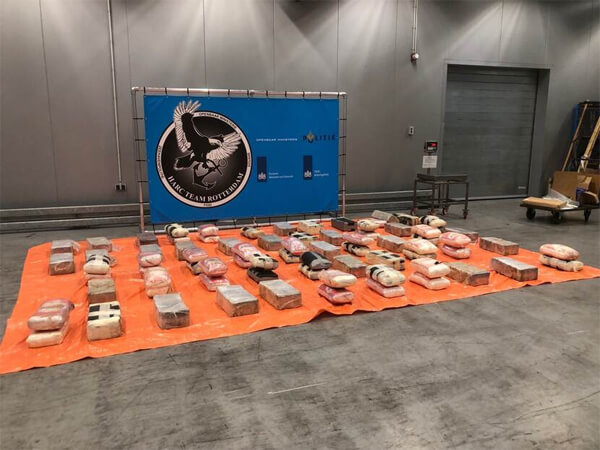 The discovery aboard the bulker was only one of three reported in the port of Rotterdam during the last week. On Thursday a vessel arriving from Curacao was found to be carrying 930 kilos of cocaine hidden in a container loaded with used cooking oil. At the end of the week, the Dutch reported one of their largest seizures finding 4,178 kilos of cocaine in two containers filled with bags of soy that had originated in Paraguay. The containers had been transshipped in Uruguay.

Panamanian authorities also reported the largest ever seizure of cocaine, 3,500 kilos. It was discovered when inspectors boarded a ship coming from Chile headed to the Netherlands. They reported finding customs seals on the containers that appeared to have been tampered with tipping them off to the smuggling. At the same time in Colombia, inspectors found 2,279 kilos of cocaine also destined for the port of Rotterdam. Again, officers inspecting an unnamed vessel noticed problems with the customs seal on a refrigerated container. It contained 29 duffel bags with cocaine valued at over $100 million.

The Netherlands public prosecutor’s office said that the seizures were part of an ongoing collaboration with customs, port police, and their office as well as international law enforcement.