The Dutch Safety Board has completed its investigation into the large-scale cargo loss from the boxship MSC Zoe off the Wadden Islands last year. As a follow-on to the casualty investigation, the board also reviewed the general risks for container ships along the busy shipping routes in the area.

On the night of January 1-2, 2019, the 19,000 TEU MSC Zoe lost 342 containers while transiting the southern lane of the Terschelling-German Bight traffic separation scheme, which runs just north of the Wadden Islands. The lost containers created a navigational hazard, fouled fishing nets and led to large-scale plastic pollution on nearby beaches. The cleanup required days of work by Dutch military personnel and local residents. 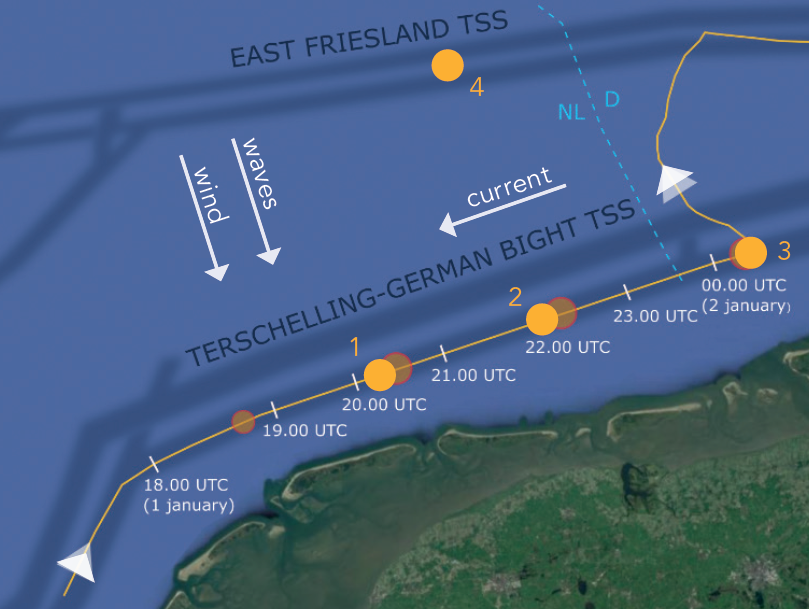 With assistance from Deltaris and MARIN, the Dutch Safety Board carried out an analysis of wave patterns at the time of the casualty, and it commissioned tank testing with a scale model of a modern large containership to evaulate likely ship motion. The tank testing showed that with the heavy beam seas experienced by MSC Zoe on that night, modern ultra-large boxships can experience severe rolling motions. Those motions result in large acceleration forces on container lashing systems, raising the risk of cargo loss. In shallow water, with the right North Sea wave height and wave period, these ships may even experience bottom contact if a "large downward heave movement coincides with a large roll motion at that same moment."

ULCV model during wave impact against the bow and a breaking wave close to the ship. (Dutch Safety Board / MARIN)

"The potential occurrence of extreme ship motions relates to the fact that container ships have gradually become larger and wider, and sail with high stability. The natural roll period of these ships closely  approximates the wave period that can prevail on the North Sea. In the event of beam seas with a wave period close to the natural roll period of a ship, as a consequence of resonance, the ship responds  significantly to the waves, resulting in violent rolling motions," the board found.

These phenomena are particularly risky in the traffic separation scheme off the Wadden Islands, according to the board. The investigation indicates that both lanes of the TSS - especially the shallower southern lane - have an elevated risk of failed lashing systems and container loss for ULCVs in a storm-force northwesterly wind.

While container loss is not directly associated with typical marine casualty concerns like oil release, material damage to the ship, injury or loss of life, it can create navigational hazards and may lead to pollution. The board raised concern that the loss of containers on these routes could cause damage to the sensitive environment of the Wadden Islands and the Wadden Sea. The accident involving the MSC Zoe resulted in large-scale plastic pollution on beaches in the Wadden Islands, providing a dramatic example.

To address this problem, the board participated in an international investigation with the flag state (Panama) and with authorities from neighboring Germany. That partnership produced five main recommendations for areas of further review:

1. the design requirements for lashing systems and containers,
2. the requirements for loading and stability of container ships,
3. obligations with regard to instruments providing insight into roll motions and accelerations
4. technical possibilities for detecting container loss, and
5. adjustments to North Sea shipping routes for the IMO's consideration.

The full report may be found here.