Construction is proceeding on Hapag-Lloyd’s next generation of ultra-large container vessels at South Korea’s Daewoo Shipbuilding & Marine Engineering. The shipyard is reporting key milestones for the new 23,660 TEU containerships, including the first-ever installation of a high manganese steel LNG fuel tank on a dual-fuel containership.

DSME previously reported that it has spent a decade developing the steel tank concept with South Korean steel company POSCO. The tank design is seen as a significant challenge to France’s GTT which has dominated the market. DSME highlights that those tanks are traditionally made of materials such as aluminum or stainless steel to withstand cryogenic conditions (-163?) for liquefied natural gas. However, the materials are costly, difficult to fabricate, and require adjustment of the production schedule due to exposed loading and being affected by external environments such as weather.

The new design for a steel tank they report can overcome these shortcomings. It has a lower price than conventional materials, and has high strength and wear resistance as well as a good performance at cryogenic temperatures. The first installation was completed in June 2022 with deck mounted IMO Type-C LNG fuel tanks on a very large crude oil carrier (VLCC). A second VLCC has also been fitted with the new tank design.

The first square Type-B LNG tank made of high manganese steel was recently loaded into the hull of the new Hamburg Express vessel building for Hapag-Lloyd. It was the latest progress on the construction of the first of the six new containerships. 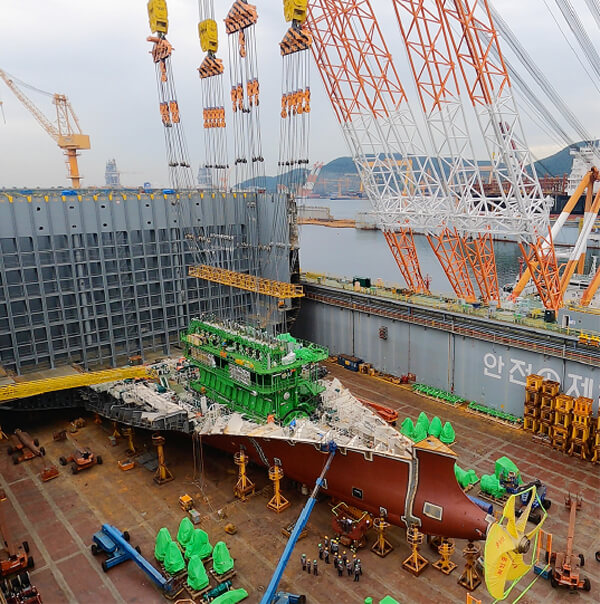 Engine being lowed by a floating crane as construction proceeds (Hapag)

DSME in September laid the keel for the vessel and recently placed the main engine into the hull. With the help of a floating crane, the 2,246-ton MAN ME-GI engine was deployed. According to Hapag, the new LNG-powered main engine has a maximum power of 58.270 kW at 76.5 revolutions per minute. The mounting and alignment of the shaft was expected to last for the next three months as DSME completes the construction of key elements of the propulsion system.

The new Hamburg Express is reported to be 1,312 feet long and will be among the largest containerships in the world based on capacity. Delivery is expected by the end of April 2023 to be followed by the sister ships. The last of the class will be delivered before the end of 2024.