HM Coastguard is adding a new tool for its search and rescue missions, unmanned drones that it plans to operate alongside its current teams' rescue helicopter and fixed-wing surveillance aircraft. The first operational drone flight will join manned helicopters, planes, boats, and cliff rescue teams on lifesaving missions at sea and over land in North Wales for the first time, this summer.

The drone was initially tested a year ago and recently during a phase of operational integration training, the drone flew for the first time in formation alongside both the HM Coastguard S92 helicopter and HM Coastguard’s King Air surveillance aircraft.

“Drones have the potential to help our coastguard teams save even more lives and it is right we are working to advance these technologies here in the UK,” said Maritime and Aviation Minister, Robert Courts. “Keeping people safe on the sea and around our coast will always be a priority, which is why we continue to explore new and cutting-edge ways to modernize search and rescue efforts.” 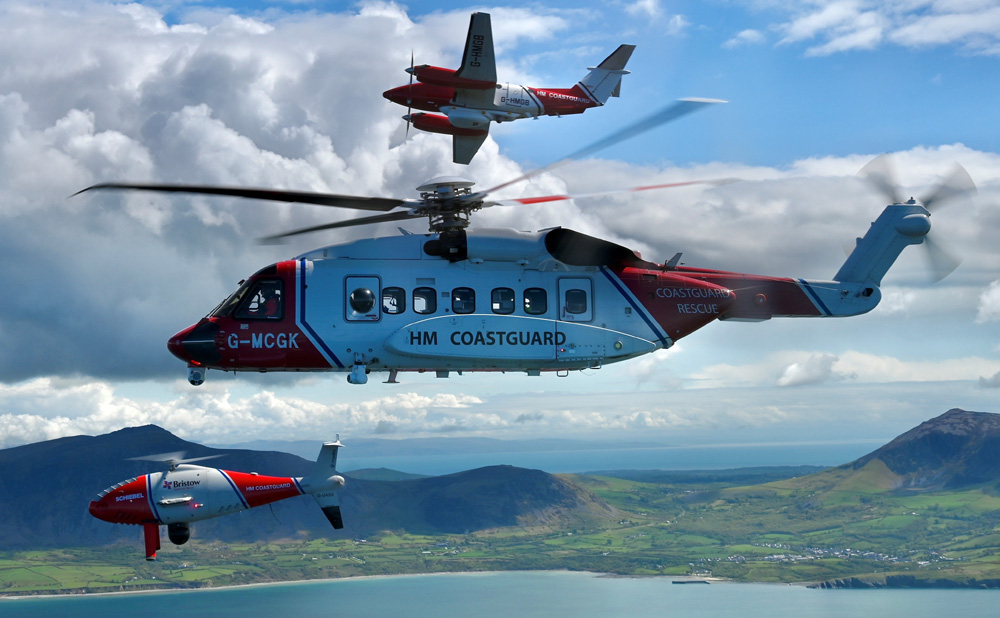 Remotely piloted aircraft are expected to play a key role when HM Coastguard launches its second-generation of search and rescue service, which is due to begin operations in 2024. The first of the drones is will fly from the HM Coastguard helicopter base at Caernarfon, in northern Wales along the Irish Sea. Plans call for it to also participate in a series of major training exercises with other rescue teams as the Coastguard prepares to expand the deployment of drone technology.

“It’s fantastic that this new and exciting technology is being rolled out in Wales first, flying alongside rescue teams and adding another layer to HM Coastguard’s search and rescue capability,” said Secretary of State for Wales, Simon Hart. “We are hoping for a busy summer in the beautiful setting of North Wales and HM Coastguard plays a vital role in keeping local people and visitors to the area safe.”

Bristow Helicopters, which will operate the drone for the Coastguard, undertook two years of rigorous trials and testing, before introducing the drone for use from the base at Caernarfon. In the first phase of its operations, the primary role will be as a safety overwatch and monitoring aircraft. This will allow the manned helicopter crews to respond to life-saving missions.