With increasing focus on hydrogen as one of the leading alternative fuels for the future, one of the challenges that remains is transporting the gas in large commercial volumes. Japan’s Kawasaki Heavy Industries continues to take a leadership role and recently was awarded an Approval in Principle (AiP) from ClassNK for a cargo containment system for a large liquefied hydrogen carrier.

Kawasaki reports that the cargo containment system, which was developed as part of a project funded by Japan’s New Energy and Industrial Technology Development Organization (NEDO) is part of ongoing research to support the commercialization of hydrogen. The design is for the world's largest capacity (40,000 m3 class per tank) containment system developed based on technology concepts already in use for large liquefied natural gas (LNG) carriers.

The containment system for which the AiP was obtained is designed to contain cryogenic liquefied hydrogen, reduced to a temperature of –253°C and one eight-hundredth its initial volume. In this form, it would be possible to transport large amounts by sea. It was developed using design, construction, and safety technologies developed through the building of the Suiso Frontier, a demonstration vessel that Japan expects to begin running on demonstration voyages to Australia later this year. The demonstration vessel, built by Kawasaki, has a 1,250 m3 carrying capacity. 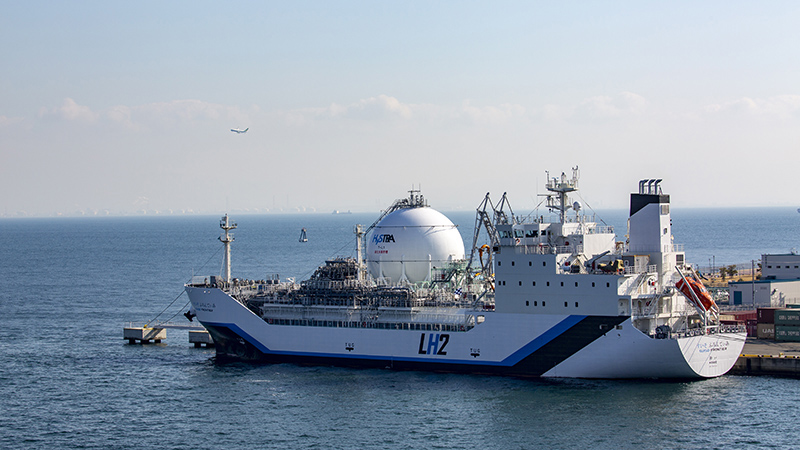 The new concepts for the containment system utilize a new type of insulation structure that uses a high-performance heat insulation system that mitigates boil-off gas (BOG) which occurs in response to heat ingress. The design also utilizes an independent, self-supporting design with a structure capable of responding flexibly to the thermal contraction that occurs when loading cryogenic liquefied hydrogen. The vessel is designed to utilize the BOG as fuel further contributing to reduced CO2 emissions from liquefied hydrogen transport operations.

Having received an application from Kawasaki, ClassNK reports that it carried out the design review of the newly developed system for a hydrogen liquified carrier, including based on its previously published guidelines for Liquefied Hydrogen Carriers. In addition, a comprehensive safety assessment of the CCS was conducted based on the HAZID risk assessment results. The AiP was issued following examinations to confirm that the containment system satisfies the IGC Code and the International Maritime Organization Interim Recommendations for Carriage of Liquefied Hydrogen in Bulk.

Kawasaki is currently developing the design for a large, 160,000 m3 liquefied hydrogen carrier that would use four CCS tanks. They expect that this vessel could start commercial operations by the mid-2020s.