A high-visibility test project is underway designed to help validate and increase the use of wind-assisted propulsion technologies in the maritime world. Funded by the Wind Assisted Ship Propulsion (WASP) project that was launched in late 2019, a wind rotor was installed on a ferry as one of five test vessels operating in the North Sea and Baltic.

A Norsepower Rotor Sail was installed in May 2020 on Scandlines’ ferry the Copenhagen, which operates between Rostock, Germany and Gedser, Denmark. The 21-ton steel foundation for the Rotor Sail was put aboard the vessel during at shipyard visit in November 2019. The 30 meter (98 foot) rotor with a 5 meter diameter (16 foot), which weighs 42 tons, was installed on the vessel during a normal overnight stay in Rostock while the vessel was in operation.

“We were able to complete almost everything within the limited time of just a few hours,” commented Captain Alan Bach of the Copenhagen. “This was key as we are operating on a 24/7 basis, every loss of service or revenue is naturally critical for ferry operations.”

This is the fourth vessel installation completed by Norsepower under the pilot project. They point out that the Norsepower Rotor Sail Solution can be installed on new vessels or retrofitted on existing ships. It is a modernized version of the Flettner rotor, a spinning cylinder that uses the Magnus effect to harness wind power to thrust a ship. 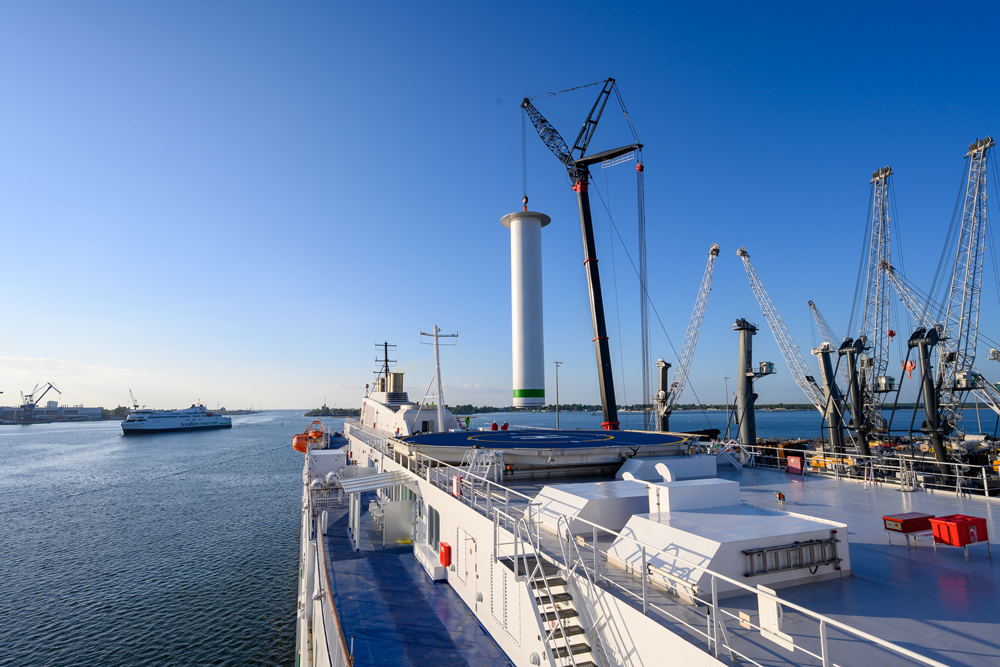 Installed as part of the EU Green Deal that aims to lower pollution and carbon levels across Europe, this is seen as a highly visible demonstration of the technology due to the fact it is a ferry transporting passengers across the Baltic. According to Scandlines, the rotor is drawing a lot of attention and questions from passengers about the technology.

The Copenhagen is already one of the world’s most energy-efficient ferries. It was built with hydrodynamic hull optimization and a hybrid-electric propulsion system with battery-powered energy storage. The rotor system is expected to deliver on average between a four to five percent fuel savings, corresponding to the same amount of CO2, and in optimal wind conditions can produce more than a 20 percent savings for vessels.

As the installation aboard the Copenhagen is a pilot project for WASP, they will be carefully monitoring the equipment seeking to validate the equipment and its performance. “We are very happy that the system is fully automated and we're expecting little in the way of technical problems,” reported Scandlines COO Michael Guldmann Petersen. “The last month of operations has been quite smooth and we see that continuing throughout the test period. We're expecting a four to five percent reduction in CO2 emissions, which is not an insignificant amount, and if everything goes well, we are considering further installations in the future.”

While the test has just commenced, everyone involved points out that wind propulsion technologies are a very visible statement from a shipping company about their commitment to decarbonize their vessels. It is believed that it can provide a significant contribution towards the IMO’s target to cut by half greenhouse gas emission from the maritime industry by 2050.