The hotly contested bidding for bankrupt Crystal Cruises’ expedition cruise ship is over, with Royal Caribbean Group emerging as the winner of the vessel which has been billed as the world’s most luxurious expedition cruise ship. Royal Caribbean, the parent company of Silversea Cruises, confirmed that it has received court approval to acquire Crystal Endeavor, the year-old cruise ship which has been laid up for most of 2022 due to the financial collapse of Genting Hong Kong.

Delivered to Crystal Cruises in July 2021, the 20,499 gross ton Crystal Endeavor was the most expensive cruise ship designed for the expedition market on a basis of cost per berth. Accommodating just 200 passengers, the ship was built by MV Werften at a reported cost of approximately $385 million or just shy of $2 million per berth versus other luxury expedition cruise ships with costs of around $1 million per berth.

Royal Caribbean Group will pay $275 million to acquire the cruise ship, significantly below the construction cost. They ultimately won the court approval beating out other bidders reported by Seatrade Cruise to include Abercrombie & Kent, which recently purchased Crystal’s two ocean-going cruise ships and rights to the brand name, and the investment group that is launching the Ritz-Carlton Yacht Collection of small luxury cruise ships.

Royal Caribbean Group was also able to assume the financing on the cruise ship. The vessel was financed through a 15-year unsecured term loan, guaranteed by the German export credit agency, Euler Hermes, with no amortization payments in the first two years.

“The expedition cruising industry is poised to resume accelerated growth, driven by demand among high-end, affluent customers for travel to remote and hard-to-access destinations,” predicts Roberto Martinoli, President and CEO, Silversea Cruises explaining the company’s willingness to pay the price for the Endeavor. “Silver Endeavour will strengthen our polar offering, further diversifying our broad-ranging product,” said Martinoli noting that as one of the most luxurious expedition ships afloat, it will also be used to accelerate the line’s growth. 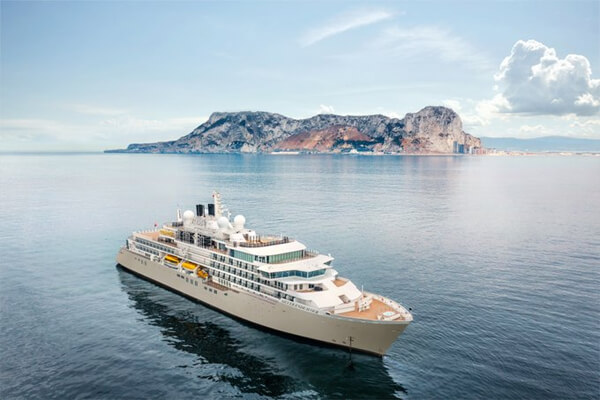 The cruise ship will be renamed Silver Endeavour, adopting the British spelling which Barbara Muckermann, Chief Commercial Officer of Silversea Cruises, said was a “testament to one of history’s most famous vessels.” She was referring to Captain James Cook’s HMS Endeavour, which he commanded on his first voyage of discovery from 1768 to 1771 to Australia and New Zealand.

Silversea at least initially only plans small changes to the cruise ship, renaming and rebranding it so that it can enter service in November 2022 sailing in the Antarctic replacing one of the line’s smaller, older ships, Silver Explorer. Saying the Endeavour is “so spacious,” Silversea said it might look to add more cabins and will not use the casino which is not in keeping with their brand. She will be deployed between the Antarctic and Arctic.

Built to PC6 polar class specifications, Crystal Endeavor was designed for polar exploration. Crystal outfitted the ship with a broad range of expedition amenities including zodiac crafts, kayaks, a passenger submarine, and an unmanned drone with a remote gimbal camera system that captures images up to five kilometers from the ship. The luxury standards aboard included all-suite accommodations, multiple restaurants, bars and lounges, an expansive spa, and a signature two-storied solarium with a swimming pool and whirlpool.

To attract former passengers back to the ship, Silversea said it will seek to recruit and give hiring priority to the ship’s former crew.  The cruise company is also offering to guarantee any passenger deposits placed for canceled Crystal Endeavor cruises saying it will refund amounts of lost deposits not recovered in the bankruptcy proceedings for passengers booking future Royal Caribbean Group cruises.

"With Endeavour, we are seeking to grow our world-class fleet to meet the exceptional demand for ultra-luxury expedition cruising said Jason Liberty, president and CEO of Royal Caribbean Group. Since completing the acquisition of Silversea Cruises in 2020, Royal Caribbean has moved to enhance the operation, now increasing the expedition fleet to five cruise ships and a total of 11 ships.