In a bid to support its shipbuilding industry, the Croatian government is reportedly going to issue state guarantees for loans for future ship construction orders. The government said its actions would support both the new Uljanik Brodogradnja 1856 operation, which had been formed to restart the bankrupt Uljanik operation, as well as MKN Yachts, a company formed by the Scenic group to build new cruise ships at the 3 Maj yard.

In March 2019, Croatian police arrested a dozen former executives of the financially-distressed Uljanik Shipyard over alleged "abuse of trust in financial transactions" and fraud. Officials alleged at the time that the scheme cost the Croatian government more than $150 million. The lawyer for the company's former president asserted that the arrests were politically motivated and intended to deflect public attention from the yard's distress.

Uljanik Group operated two shipyards, one in Pula (Uljanik) and another in Rijeka known as 3. Maj. As of 2019, it had about 4,000 employees between the two sites, before the company was forced into bankruptcy. The company had been struggling with financial difficulties since July of 2018, despite government assistance. Finally, in January 2020, the creditors of the financially-distressed shipbuilding holding company voted to liquidate some assets, but the yard in Pula was excluded from planned asset sales and the government promised assistance to resume building operations.

The efforts to resume operations were started with the new company called Uljanik Brodogradnja 1856. In March, it was granted a 30-year lease to resume the Pula shipbuilding operations. 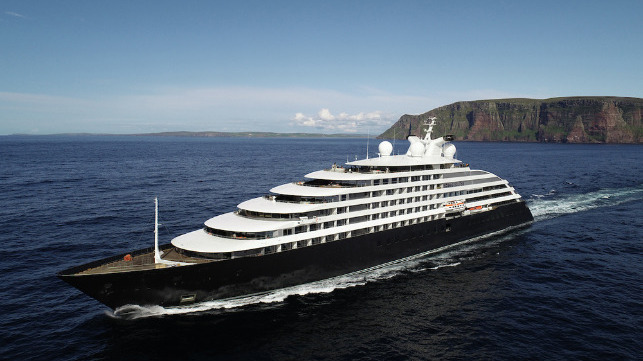 The government also agreed to provide guarantees to MKM Yachts for a loan reportedly valued at $95 million or 80 percent of the anticipated construction costs of Scenic’s second expedition cruise ship's hull. The hull for the ship will be built at the 3 Maj facility with MKM working as the contractor.  MKM will oversee the outfitting of the 17,500 gross ton luxury cruise ship.

Scenic group, a river cruise and tour company, had ordered two luxury expedition cruise ships from the 3 Maj shipyard. Scenic first announced the plans for its expedition cruise ship in 2016 and anticipated delivery of the ship in 2018. After the shipyard filed for bankruptcy Scenic made the unusual decision to take over management of the construction and complete the outfitting on its own. The ship was completed a year behind schedule and introduced in the summer of 2019. At the time, the fate of Scenic Eclipse II was uncertain.

In May 2020, Scenic announced that a unique business model had been formed for the future construction projects. Under an agreement with the Croatian Government, they will use the existing infrastructure and knowledge of Croatian shipbuilders working in collaboration with Scenic's team. A newly formed company, MKM Yachts, wholly owned by the Scenic group, will take responsibility for Scenic’s new ocean ship builds. The shipbuilding operations will be conducted in a dedicated separate section of the existing 3 Maj Shipyard. As part of its agreement, Scenic also announced that it plans to build four additional vessels over the next six years in Croatia, but noted they made be different designs.

While critics of the government are complaining it took a year for the government to provide its promised support, the move to guarantee loans is seen as a critical step in the future of the shipbuilding operation. Scenic had already announced that steel had been cut for its second cruise ship, and now the company also plans to use the loan guarantees to seek new orders for the yard in Pula.