The first inland barge owned by the Dutch company, Future Proof Shipping, arrived at a shipyard in the Netherlands to begin a conversion from traditional diesel power to become one of the first vessels operated on hydrogen and fuel cell technology propulsion. The company has announced plans to convert three vessels to the zero-emission technology.

FPS Maas, built in 1993 and acquired by the company in 2020, made her final voyage on diesel and an internal combustion engine from Belgium to Rotterdam. She arrived at the Holland Shipyards Group shipyard in Werkendam on August 15 where the retrofit work to convert her to a zero-emission vessel is set to begin.

“Over the coming months, the engine will be removed, and a hydrogen and fuel cell propulsion system will be installed,” said the company in a social media posting. A complicated project, which is also seen as a demonstration of the technology, was first announced in March 2021 but is a year behind schedule while the technology was developed.

When the retrofit is complete in December, the vessel that will have a cargo capacity of 200 TEU is expected to be sailing 100 percent on hydrogen power. Once back in service, the containership operating along the busy approximately 150-mile Rotterdam and Antwerp inland waterway is expected to reduce greenhouse gas emissions by 2,000 CO2e tonnes annually.

The retrofit project will involve removing both the main engine and gearbox of the 360-foot vessel and installing a new modular propulsion system. It will consist of electric motors, hydrogen tanks, a PEM fuel cell system (necessary for converting hydrogen into electricity), and a battery system. The compressed hydrogen tanks, the fuel cells, and the battery system are separate units that can be removed for maintenance or replacement purposes.

FPS acquired two additional inland vessels in October 2021 that it also plans to convert to hydrogen-powered propulsion. The company aims to operate a fleet of 10 zero-emission inland and short-sea vessels over the next five years.

Earlier this year, the Netherlands granted its first license to IJmond Environmental Service on behalf of the Velsen Municipality to use hydrogen as a bunker fuel. Windcat Workboats loaded hydrogen aboard its first of its kind hydrogen-powered CTV Hydrocat 48. The vessel which was delivered this spring is used to transport crew to and from the port of Ijmuiden to 44 Vestas turbines that make up the Belgian wind farm Norther. 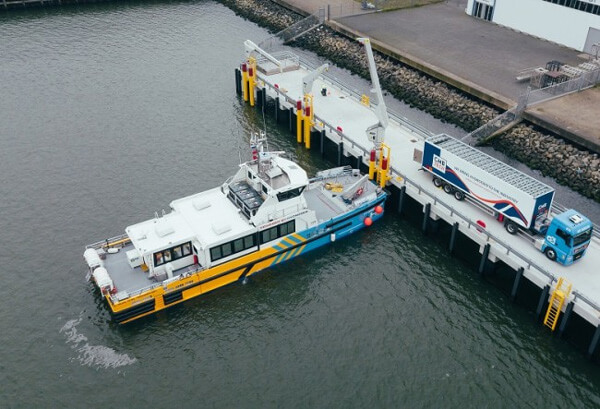