Reports from Croatia indicate that the start-up company Storylines has entered into a formal construction contract with Brodosplit for its planned resident ship. The delivery date is reported as 2025.

The company reported previously that it had selected Brodosplit for the construction of what they promise will be a revolutionary approach to the residential cruise ship concept. The ship, known as the Narrative, has been in engineering and development for the past few years as Storylines marketed its residents. Reporting indicates the starting price is $1 million rising to as much as $8 million for the individual residences. A limited number of rental apartments are also available with a starting price of $647,000 for a 24-year lease. Total sales revenue of the project is valued at $1.5 billon.

Only one ship has succeeded in launching the residence at sea concept, although several others have explored the idea or tried to market the concept. The World (43,000 gross tons) entered service in 2002 with 165 private residences, although the company requires all the owners to have a full-time residence on shore. Several cruise lines, including Crystal Cruises when it was owned by Genting Hong Kong, proposed incorporating residents as a part of their next generation of cruise ships, only to later abandon the idea. Currently, MSC Cruises however is launched the residence concept as an element aboard its new cruise brand Explora. The company recently said it would increase the number of residences on its third and fourth cruise ships as well as order two more cruise ships all to be built by Fincantieri. The inaugural cruise of Explora I is scheduled for May 2023.

Storylines approach calls for a large passenger ship increasing both the number of residences and the amenities that will be available. The ship will be at least 55,000 gross tons and 741 feet in length. There will be a total of 547 residences aboard each with a private balcony. The crew will reportedly number 450 to provide a full range of services. The design is for a dual-fuel ship that will operate on LNG. 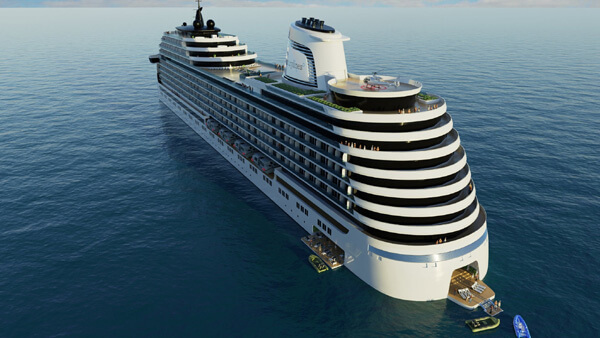 Storylines points out that their concept has all the features of a modern cruise ship but also unique amenities designed for the residence concept. They are saying the ship will feature 20 bars and restaurants, a theater, communal spaces for residents to gather, and a marina to provide a sports platform and dock for watercraft while the vessel is anchored in port. Other cruise ship-style amenities reported include pools, a fitness center, spa, running track, and even a bowling alley.

To support the residences, Storyline says the vessel will have features similar to a small city. This includes everything from an aging clinic to a hospital and a school. There will be office spaces available for working people who are in residence as well as a library, bank, and post office.

"We're delighted to be partnering with such a respected European shipyard that has a long history of building high-quality passenger ships," said Storylines CEO Alister Punton in the company’s press release.

The order comes at a critical for Brodospilt. The shipyard found itself caught this spring in the European sanctions again Russian financial institutions. They had a construction finance loan for new expedition cruise ships underway at the yard, but they were unable to draw on the lines due to the sanctions. The company sought the assistance of the government and was forced to begin a pre-bankruptcy process. The yard has suspended employees working on the projects until the financial issues can be resolved.

The Narrative would be the largest and most complex cruise ship built by Brodosplit. They have recently been building smaller cruise ships for the expedition market. They also built assembly blocks for some of the large Fincantieri cruise ship projects. Those blocks were sent to Fincantieri to be incorporated into the cruise ship construction.

Reached by the Croatian media, management confirmed that the construction contract has been signed saying they were hopeful Brodosplit would soon be able to withdraw its bankruptcy petition. Tomislav Debeljak, CEO of the company’s parent company DIV Group, confirmed that the order has been signed. He said technical work is proceeding and he believed that construction work would start shortly.