The organizations overseeing the movement of commercial vessels into and out of San Francisco Bay and the Port Oakland launched a new traffic management program for containerships modeled on the program launched just over two months ago in Southern California. After repeated scenes of vessels stacked up in the anchorages around the world, the goal is to provide better management and oversight to reduce emissions near shore and improve vessel safety by largely eliminating the stacking of containerships at anchor.

Effective January 10, container vessels bound for the Port of Oakland will receive an assignment in the arrival queue based on their departure time from their last port of call. Under the system, vessels agree to remain outside a new “Safety and Air Quality Area,” 50 miles off the Northern California coast until their assigned arrival time. Previously, containerships entered the queue for the port when they cross a line 80 nautical miles from the coast and anchored in the Bay to await the dock space.

“The resounding success of the new container vessel queuing system in Southern California has set the stage for this expansion to the Bay Area,” said PMA President and CEO Jim McKenna. “This updated system has significantly reduced the number of vessels at anchor near our ports, enabling safer operation for vessels and their crews as well as additional protections for coastal communities.” 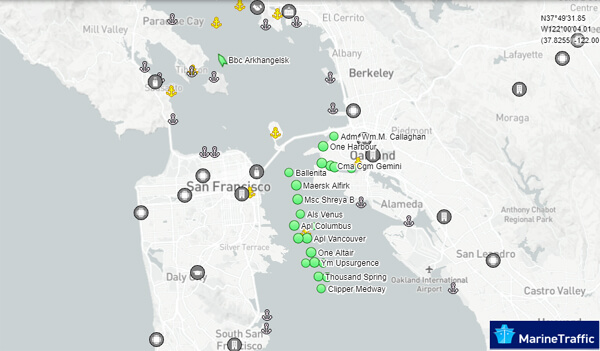 According to the organizations, the new process reduces emissions from vessels anchoring in or near the Bay Area and allows for more space between ships, which will be especially important during bad weather or the region’s notorious fog conditions. The new arrival procedure is not designed to reduce the number of vessels coming to the port but provides more predictability. Vessels, they said, can slow steam to the port, reducing fuel consumption and emissions during the voyage, and spending less time idling at anchor.

Southern California first introduced the system in November 2021 after the headlines about the disastrous oil leak from a pipeline sitting on the seafloor that was likely dragged and damaged by one or more of the containerships in the anchorage at the beginning of 2021. Port officials cited the need to better space vessels and reduce the safety concerns ahead of the onset of winter storms.

When the system was introduced in San Pedro Bay there were 86 containerships in the anchorage or in drift areas that port officials had reintroduced early in 2021 due to the number of vessels which were routinely filling the primary and a second anchorage waiting for terminal space in the dual ports of Los Angeles and Long Beach. Today, the Marine Exchange of Southern California reported that there were 14 containerships in the anchorage or the drift areas.

Southern California did not reduce the total number of containerships by implementing the program. The Marine Exchange reports that there are currently 89 containerships slow speed steaming or loitering outside its Safety and Air Quality Area for a total of 103 containerships waiting for terminal space. Anecdotal reports say the queue has been shifted south all the way to the coast of Mexico in addition to a line of vessels from Asia across the Pacific.

“I note PacMMS can't clear the backlog of 103, but it continues to accomplish its twin goals of increasing safety and air quality off the ports of LA and LB by returning to the pre-Covid/backlog days when container ships almost always went directly to a berth/dock, rarely anchored, never loitered,” writes Captain Kip Louttit, Executive Director for the Marine Exchange of Southern California, in his daily update.

Other ports in North America and other regions of the world may also decide to follow similar systems as they too work to manage the backlogs of containerships outside ports.