Containers Begin Coming off Ever Forward as Salvage Continues

Salvage effort for the containership Ever Forward entered a new phase over the weekend as the 127,000 dwt vessel remains firmly aground in the Chesapeake Bay. After days of dredging and two failed attempts to pull the vessel free, the team determined that they needed to lighten the vessel by removing containers.

The lifting operation began on Saturday, April 9 and continues during the daylight hours each day. The U.S. Coast Guard which is overseeing the operation reports the goal is to remove up to 550 boxes from the vessel. Her carrying capacity is reported as 11,850 and images of the vessel show that she appeared to be nearly fully loaded when she went aground on March 13.

The salvage teams spent most of last week positioning equipment for this phase of the operation. Two cranes with a sufficient height to reach the stacks and lift capability to manage the containers were positioned alongside. Pictures of the operation show how difficult it is with crews having to rappel to secure each container for the lift.

Why is it taking long to offload containers from #EverForward?

Most container operations do not involve repelling off the ship's house to trip the twistlocks of each box.

But it is awesome!

I am so jealous as that job looks like a blast!

You have to love salvage ops. pic.twitter.com/KW5dZZwcSz

Professor Sal Mercogliano of Campbell University who has been following each step of the salvage reports that the removal operation is requiring up to 10 minutes per container. He reported on his social media feed that 22 boxes were removed on Saturday and a further 21 on Sunday.

The containers are being placed on barges alongside the vessel and the barges are shuttling the containers back to the Seagrit Marine Terminal in Baltimore. There they are being offloaded with shore-based handling gear.

“Salvage experts determined they would not be able to overcome the ground force of the Ever Forward in its current loaded condition,” the U.S. Coast Guard reported. “The new strategy offers the best chance of successfully re-floating the Ever Forward.” 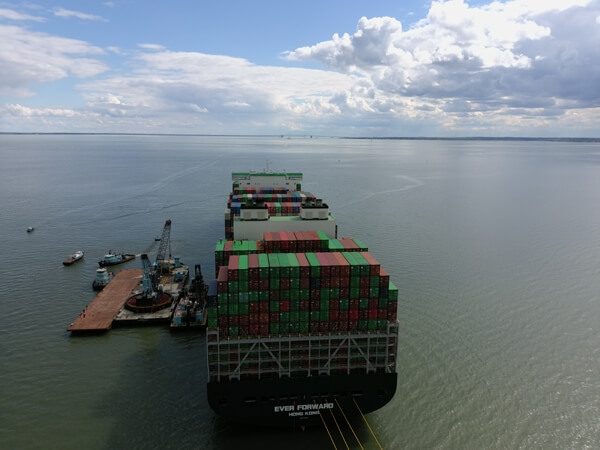 Some reports are indicating that they might try a new effort to pull the vessel free as early as April 15. To prepare for the next effort to get the vessel out of the mud, the salvage team also planned to place two anchored pulling barges. Pictures from around the Ever Forward show one of the barges anchored off the stern with four lines attached to the containership. The plan had been to place the barges at the same time as the cranes were being move into position.

The Coast Guard’s Unified Command overseeing the operation reported that it should take approximately two weeks. They noted however that timeline may change based on weather conditions and other variables outside the control of the Unified Command.

Ensuring the ship’s stability and monitoring for any signs of pollution continue to be top priorities for the Unified Command. The Coast Guard reported that in addition to regular soundings of fuel and ballast tanks, a naval architect and salvage master are remotely monitoring a recently installed sensor system to constantly evaluate the ship’s stability and integrity.