The Liberian-flagged container ship JPO Libra was reportedly struggling to hold position in the waters off Cape Town, South Africa during a cape storm. The 4132 TEU container ship’s port anchor had become fouled preventing the ship from moving to a more secure position during the storm.

South African authorities had warned of an approaching storm and advised 10 vessels anchored in Table Bay to reposition to ride out the storm. The JPO Libra, however, was unable to move because when she raised her anchor it became fouled on other cables and chains. She was unable to dislodge the material. 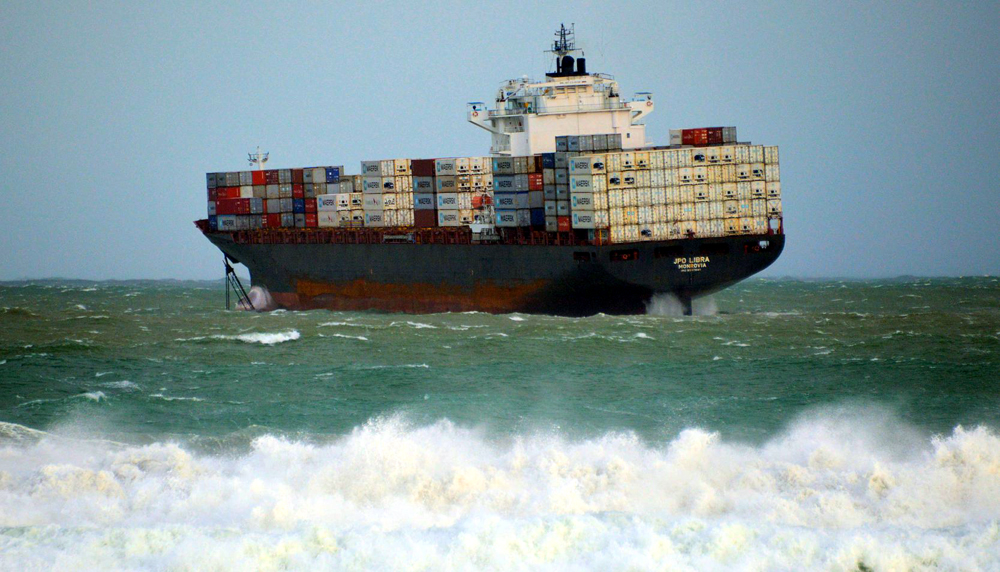 Maersk confirmed to the local newspaper The Times at the vessel was “currently stuck at anchor.” A spokesperson for the shipping company told the newspaper that they were in contact with the ship and believed that it was not in danger and not dragging its anchor.

The South African Maritime Safety Authority (SAMSA) also confirmed that it also believed the vessel was not in any immediate danger but they were continuing to closely monitor the situation. In addition, they said that a tug was standing by and could be dispatched if needed to assist the JPO Libra.

A ship at sunset beach in Milnerton #CapeTown trying to get to the shore.

Despite the assurances of the local authorities, the vessel’s close in position to shore drew a lot of attention from local residents. Naval architect Alexander Simonis posted pictures to Facebook and reported that the vessel’s engines were running. He said that she appeared to be barely managing in the high seas and winds estimated at over 50 miles per hour. By around midnight local time, however, he told The Maritime Executive that the situation had improved with the winds abating and the vessel seemed to be still maintaining position.

SAMSA said that the JPO Libra had been in South African waters since late June when she arrived from West Africa. As soon as the storm abates, the plan was to send assistance from Cape Town to help the vessel become free of the debris and to determine what if any additional actions would be required.