Construction kicked off on the United States' first large, commercial scale, offshore wind farm with a ceremonial groundbreaking in Massachusetts. The event was hailed as a turning point in the U.S.’s ambitious efforts to rapidly develop its offshore wind power generation in the coming years.

The ceremonies marked the start of work for the Vineyard 1 project, an 800 MV wind farm that will be located approximately 15 miles off the coast of Martha’s Vineyard. Due to begin commercial operations in 2023, it will generate electricity for more than 400,000 homes and businesses in the Commonwealth of Massachusetts. Vineyard Wind 1 will be operated by Vineyard Wind, a company owned by Iberdrola through its Avangrid subsidiary and Copenhagen Infrastructure Partners.

“Many people have worked extremely hard to make today possible, a day where we turn forward-thinking into action,” said Vineyard Wind CEO Lars T. Pedersen. “From the environmental and community activists to our elected leadership at the local, state, and federal level, it’s taken all of us, pulling in the same direction and not being deterred by setbacks both large and small.  By focusing on our ultimate goal – developing clean, cost-effective energy that will cut carbon pollution and create thousands of jobs in the process – we never lost sight of what mattered most, and we ultimately have a better project as a result.”

The U.S. Department of the Interior’s Bureau of Ocean Energy Management (BOEM) approved the project plan for Vineyard Wind 1 on July 15, 2021, clearing the way for construction to proceed. The first steps of construction will include two transmission cables that will connect the Vineyard Wind 1 offshore wind facility to the mainland. Two submarine cables will carry the electricity from an offshore substation to the landing point at Covell’s Beach. Offshore work is scheduled to begin next year with the installation of the foundations and cables, followed by wind turbines. The project will utilize 62, 13MW General Electric Haliade-X wind turbines. 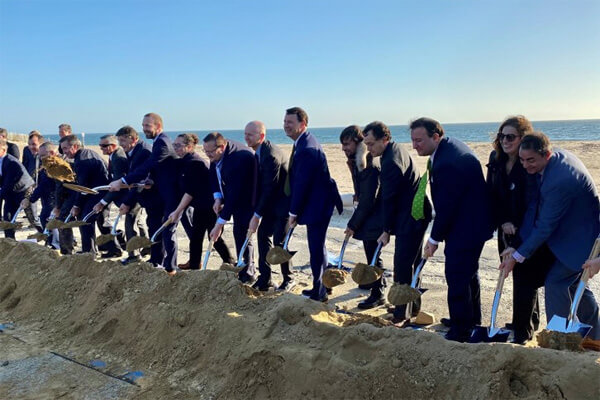 “Not many countries have the ambition to launch their first project at a scale that will power 400,000 homes and create 3,600 jobs,” said Ignacio Galán, Chairman and CEO of Iberdrola and Chairman of AVANGRID. “With 15 years of offshore wind leadership, Iberdrola and Avangrid are more than ready to help the U.S. benefit from the substantial opportunities of offshore wind including economic investment and job creation. Our offshore developments in New England and North Carolina/Virginia could represent a total investment well above $15 billion in the coming years.”

While Vineyard Wind 1 is the first large offshore project in the U.S. to reach this stage, BOEM highlighted that it is currently reviewing 10 additional Construction and Operations Plans, and plans to complete its review of another five or more by 2025, which would represent more than 19 GW of wind energy. In addition. Efforts are preparing for a lease sale offshore the Carolinas, as well as preparing for lease sales in New York and offshore California next year, and longer-term projects exploring the wind potential in the Gulf of Maine and Gulf of Mexico and offshore Oregon and Hawaii.

“As the first-mover on offshore wind, Massachusetts has set many milestones, but the start of onshore construction for the Vineyard Wind project marks the beginning of a historic new chapter for this industry in the United States,” said Energy and Environmental Affairs Secretary Kathleen Theoharides.“Offshore wind is the centerpiece of our strategy to achieve Net Zero emissions in 2050, and building this first project will not only put this industry on the path for long-term success in the United States, but will help us power a green recovery that drives investment in our historic port areas, creates well-paying local jobs, and provides new economic opportunities for underserved communities.”