The consortium consists of TenneT, Energinet, Gasunie and the Port of Rotterdam. Its aim is to facilitate the large scale roll-out of far North Sea offshore wind based on an internationally coordinated rollout of hub-and-spoke projects. An internationally coordinated approach could connect and integrate large scale offshore wind more effectively and with significant lower costs compared to continued individual national planning, says NSWPH.

The concept involves the construction of one or more hubs that would accommodate a large number of links to wind turbines and/or offshore wind farms and facilitate the distribution and transmission of electricity to the Netherlands, Belgium, the U.K., Norway, Germany and Denmark. The envisioned power capacities are from 70GW to 150GW by 2040 and up to 180GW by 2045. 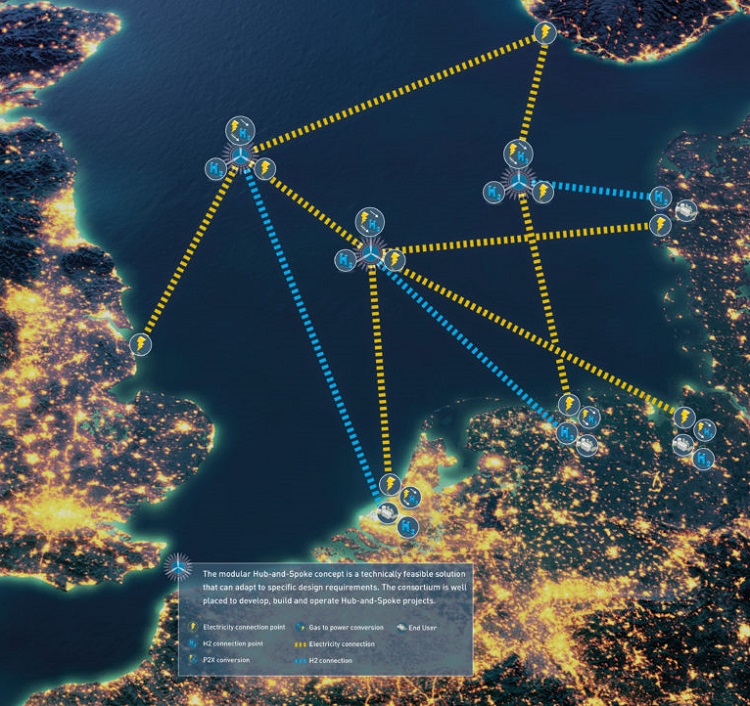 According to international studies, the large scale roll-out rate of offshore wind is crucial to meet Paris targets. NSWPH studies indicate that a gradual roll-out of 10 to 15GW hubs is the next logical step towards the needed large offshore wind build-out.

A first hub-and-spoke project will likely be electrically connected to shore with additional power-to-gas to provide energy system flexibility. It could be operational in the 2030s.

In the future (after 2030), once large, far-offshore wind regions have been defined for development, it will be possible to develop several hubs that will act as central platforms for supporting the infrastructure required to transport the energy, e.g. for converting electricity into gas (including and in particular green hydrogen) instead of using the offshore converter platforms commonly used at the moment.

Hub substructures can be based on different foundation types: