Disposal of retired ships in an environmentally-friendly and safe manner remains one of the largest challenges for the maritime industry. Despite government initiatives and watchdog groups, shipbreaking remains a dirty and labor-intensive operation with a poor overall safety record according to groups such as NGO Shipbreaking.

A Dutch start-up company reports that it has designed a new process that is fully automated and quickly extracts the steel from ships creating a circular economy that is also environmentally sensitive. Circular Maritime Technologies International (CMT) says with the backing of partners including Aseco Europe, Damen Shipyards, Enviu, Fluor, Grimbergen Industrial Systems, Huisman Equipment, Jansen Recycling Group, KCI, Sea2Cradle, Sojitz Corporation, and Stork, it will soon launch its proof-of-concept prototype in the Netherlands. CMT plans to set up yards with international partners and attract business from shipowners by matching the price paid by South Asian competitors.

Nearly 150 commercial ships were sold to breakers in the second quarter of 2022 reports NGO Shipbreaking. The majority of the ships go to the Far East, with India, Pakistan, and Bangladesh among the largest operators of scrapping operations. The yards in Turkey are among the few that have EU certification. 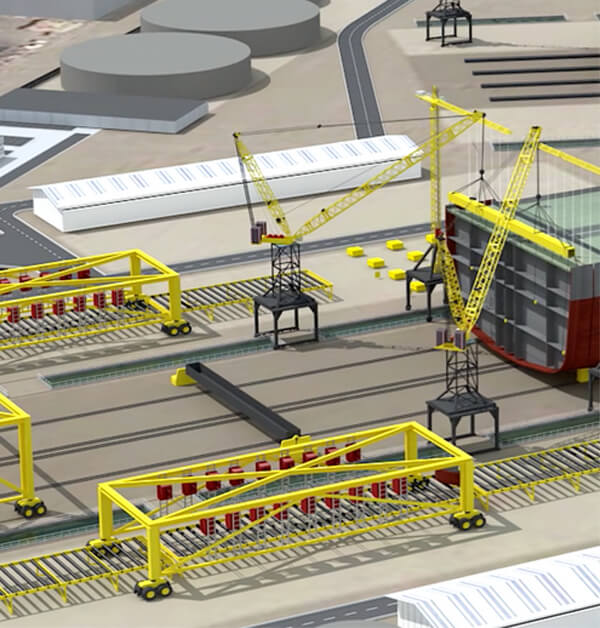 CMT says that there have been no major developments over the last 50 years in the ship scrapping industry. Despite requirements by the EU, the majority of ships are scrapped using torches and human labor. One major concession that has been won is the removal of some materials suitable for recycling and the use of concrete pads in some locations so that the waste does not enter the soil. However, in many locations, such as Asia, ships are simply run onto the beach and pulled apart.

“CMT will revolutionize ship recycling by delivering clean steel thanks to an automated, low carbon, contained and circular process that does no harm to humans or the environment,” the company reports.

In a schematic of the operation, they show after preparation a ship would be lifted out of the water and placed on a transfer system where the automated cutting begins with hydro cutters. The ship would be initially cut into 300 MT slices, with one slice taking about two hours and each piece put onto a frame. The slice would be cut into six chunks in approximately two more hours, and then with wire cutters taken into 10 blocks in an additional two hours. The blocks are then moved into a stripping operation that separates elements such as pipes and cables before the block is hydro blasted. Then laser cutting reduces the remaining parts into steel slabs. 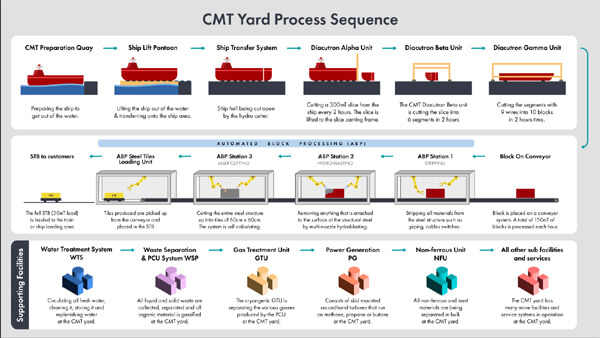 According to the company, the yard runs on its own power and produces clean steel, strongly related to green steel production. In addition to the steel, each ship would be separated into regular scrap, clean assorted non-ferrous, clean assorted inert materials, and the liquid and solid waste materials and processed at the CMT yard and converted into basic gasses to produce electricity, LNG and or H2.

The process will be fully circular and they believe it can be developed to scale to become cost competitive with the Southeast Asian scrappers.