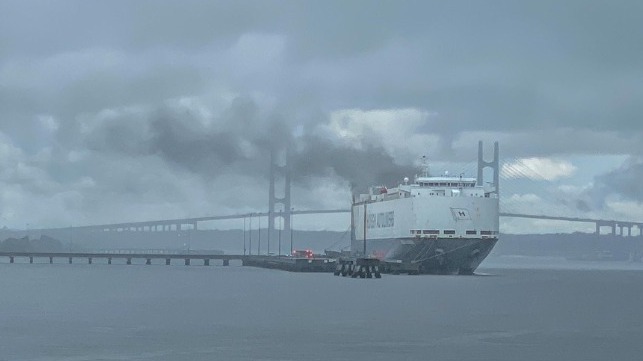 Container shipping giant CMA CGM believes that compliance with the 2020 sulfur cap will involve and additional average cost of $160 per TEU, based on current conditions.

The new IMO cap, effective January 1, 2020, will require all shipping companies to reduce their sulfur emissions by 85 percent, and CMA CGM is planning a mixed approach with the use of low sulfur fuel, the use of LNG for nine new ships it has on order and some scrubber retrofits.

The company says the additional cost will be taken into account through the application or adjustment of fuel surcharges on a trade-by-trade basis. “We will inevitably have to review our sales policy regarding fuel surcharges,” says Mathieu Friedberg, Senior Vice President Commercial Agencies Network.

Earlier this month, Maerks Line announced a new bunker adjustment factor (BAF) surcharge it says will enable customers to predict, plan and track how changes in fuel price impact the shipping freight rate after 2020. The new BAF surcharge aims at recovering the Maersk Line costs of compliance with the cap - the use of low sulfur fuel and a limited number of scrubber installations.

The Global Shippers Forum reacted with suspicion to Maersk's BAF announcement, saying: “Based on the information released by Maersk, the new charges, which are additional to agreed contract rates, are based on two factors - an average cost of fuel and a ‘trade factor’ that upscales the costs on head trades and discounts the fuel cost on reverse trades. But because the charge is per box, the greater number of revenue-earning boxes sailing west will collectively pay far more than they need to in order to compensate for the same boxes returning east when empty.

“This has the effect of applying higher than average surcharges on their most profitable routes. For example, the Far East to North Europe route has a trade factor of 1.3, but North Europe to Far East of 0.7. In addition, Maersk has decided to help itself to a whole year of higher fuel surcharges, a full 12 months before the rules requiring them to use surcharges actually come in. And the new charging structure would apply to all variations of fuel price, not just due of the introduction of low sulfur fuel.”

James Hookham, GSF Secretary General, said: “Asking customers to contribute to new environmental costs is to be expected, but this charge lacks transparency; no data is available to let customers work out how the charge has been calculated. Given historical experiences with surcharges, shippers are naturally suspicious over something shipping lines say is ‘fair, transparent and clear.' GSF will be taking this piece of financial engineering apart piece by piece as we suspect this has more to do with rate restoration than environmental conservation.”

Hookham says Maersk has other options and voiced his support for scrubbers in preference to the use of low sulfur fuel. “This requires a one-off capital expense, but for shippers this is a better option than paying sulfur surcharges indefinitely. Some of Maersk’s biggest competitors are taking this different approach, and customers will be looking at the options and voting with their wallets.”

However, Ocean Network Express (ONE), the merged ocean carrier businesses of NYK, "K" Line and MOL, has also signaled its intention to use low-sulfur fuel oil, at least during the first few years of post-2020 compliance. Scrubbers are a retrofit option for several of ONE's vessels, but would require sacrificing cargo space and taking each vessel out of service for more than a month.