Cleanup Under Way for Spill Near New Orleans' French Quarter

The U.S. Coast Guard is working with a private pollution control contractor to clean up an oil spill along the downtown New Orleans waterfront near Mississippi River mile marker 95.

The spill - a sheen representing an unknown quantity of oil from an unknown source - appeared near the Riverwalk Gazebo in New Orleans' Woldenberg Park, a green space at the edge of the French Quarter. The site is one mile upriver from the New Orleans Convention Center.

1,500 feet of containment boom has been deployed to limit the spill's spread. Six spill response boats, Coast Guard shoreline response teams, and assets from the Louisiana Oil Spill Coordinator's Office are on scene to address the incident.

The cause of the spill is under investigation.

It is the second release of petroleum at mile marker 95 in recent years. In January 2016, a towboat was involved in a collision with barges at a fleeting area on the opposite bank of the river, resulting in a breakaway of six barges and a small release of 20 gallons of residual oil product. The incident resulted in the temporary closure of the river between mile markers 93 and 95.6.

Downtown New Orleans also experienced a spill and sheening event in April 2018 when the freighter Pac Antares hit a pier, spilling HFO into the water. That release occurred on the first day of New Orleans' French Quarter Fest, a live music fair at Woldenberg Park, the same location as Thursday's spill.

Another spill event occurred later that month when the MR2 tanker Iver Exporter released 2,600 gallons of HFO into the river at a refinery complex in Norco, Louisiana, just upstream of New Orleans. 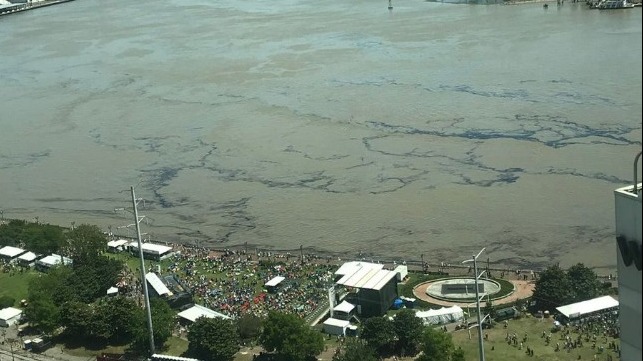