Responding to the anguish of the families of the missing seafarers from the Gulf Livestock 1, the government of the Philippines announced earlier in the week that it had requested the assistance of additional neighboring countries for a further search for the lost vessel. The families of the sailors had repeatedly asked for a search of additional areas, including smaller deserted islands in the East China Sea near where the vessel is believed to have sunk during a typhoon at the beginning of the month.

CNN reported that the search was going to be undertaken by China, South Korea, and Taiwan. The Japan Coast Guard had initially undertaken a search and rescue mission in the area after the vessel reportedly capsized and sunk early on the morning of September 2. JCG conducted searches until sunset on September 10, when after finding no additional survivors or debris it reported that it was going to revert to its normal patrol schedule in the area. The Japan Coast Guard rescued two survivors, one in the water and another in a life raft, and found a third sailor floating in the water who was later pronounced dead at a Japanese hospital.

The Chinese Embassy in Manila issued a brief statement on September 24 reporting that its coast guard had conducted a search on September 19 and 20 as requested by the Philippine Department of Labor and Employment (DOLE). The statement said that they, “regretfully found no trace of the missing sailors. Our thoughts and prayers go out to the missing crew members. We will continue to provide necessary assistance as requested by the Philippine side and sincerely hope all of them could be found at the earliest.” 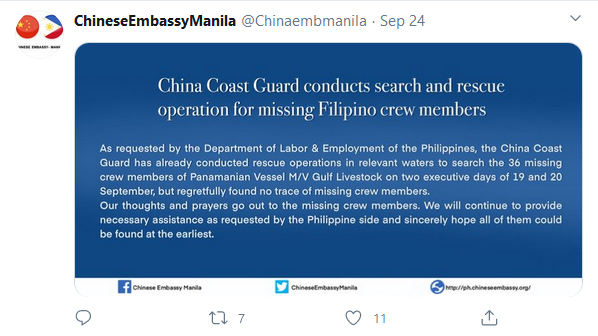 Media reports continue to say that the operators of the vessel, Gulf Navigation, is exploring the possibility of hiring divers to search for the wreckage. Authorities in New Zealand, where the ship had departed from on its last voyage, have asked that a search be undertaken to recover the ship’s voyage recorders to provide answers to the families.

What is known of the tragedy comes from the survivors’ reports. They said that the vessel sailing with 5,800 cows bound for China sailed into a typhoon causing the ship to take on water in violent seas. The ship reportedly blacked out and rolled over when it was struck by a large wave during the storm. The captain had ordered all crew topside and into life jackets. At the time, there were 39 Filipino sailors aboard along with two each from New Zealand and Australia. The three people found were all Filipinos.

The two surviving sailors returned home to the Philippines on September 19 after a brief stay in a Japanese hospital. During its searches, the Japan Coast Guard also located the bodies of several of the cows as well as debris including a damaged lifeboat and life jackets. According to the families, a second lifeboat and several additional rafts were unaccounted for when the search was suspended.