The Chinese navy's prototype railgun has made a new public appearance, this time under way. Its profile and the markings of the testbed vessel on which it is mounted indicate that it is likely the same unit, and may now have progressed to sea trials.

Photos published on Chinese social media in January 2018 showed what appeared to be a turret-mounted railgun aboard an aging People's Liberation Army (Navy) tank landing craft, the Haiyang Shan, with an extensive array of containerized equipment on deck just aft of the device. New photos on Chinese social media show a vessel with the same hull number and appearance as the Shan. 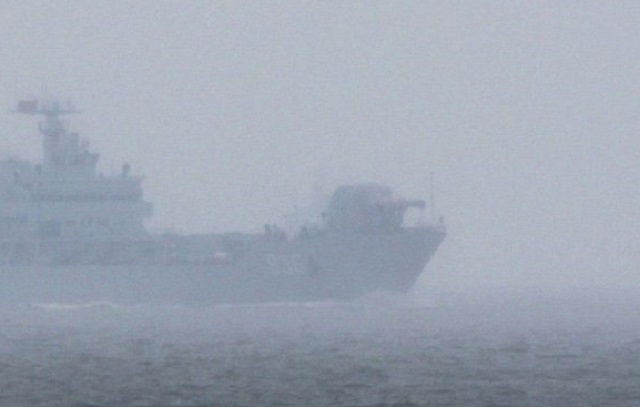 China has been working on railgun technology since at least 2011, following in the footsteps of American efforts to develop a comparable system. A maintainable, usable railgun would be a desirable weapon: it would allow a warship to launch a projectile with tremendous force, long range and relatively low unit cost. In theory, the railgun could be deployed against surface targets, aircraft and even high-speed missiles.

The U.S. Navy has yet to deploy a railgun aboard a vessel, though its Zumwalt-class destroyers were designed to support the system's power requirements for a future retrofit. For years, American defense technologists faced difficulty in building a device that could withstand the extreme stresses of repeated firing, but the current prototype under development at the Office of Naval Research's Dahlgren division has reportedly resolved this issue through the use of new materials. ONR Electromagnetic Railgun program officer Tom Boucher told USNI News late last year that the only major engineering task left before deployment of a shipboard demonstrator is the design of a suitable deck mount for the device.