The Shanghai International Energy Exchange launched trading of yuan-denominated crude oil futures contracts on Monday. This is the first in Asia, and it allows foreign companies to participate, with contracts being settled in renminbi (the yuan is the basic unit of the renminbi).

The listed futures for trading are contracts to be delivered from September this year to March 2019. The benchmark prices of 15 contracts were set at 416 yuan ($65.8), 388 yuan and 375 yuan per barrel, varied by delivery dates, and 20 minutes after the opening, 14,000 transactions had occurred.

China surpassed the U.S. to become the world's largest importer of crude in 2017, and Wood Mackenzie's research director Sushant Gupta, said: “We expect China's crude import requirements to grow by about 2.1 million b/d from 2017 to 2023, much larger than any other country's incremental requirements. Rightly so, China would want to play a more active role in influencing the price of crude oil.” 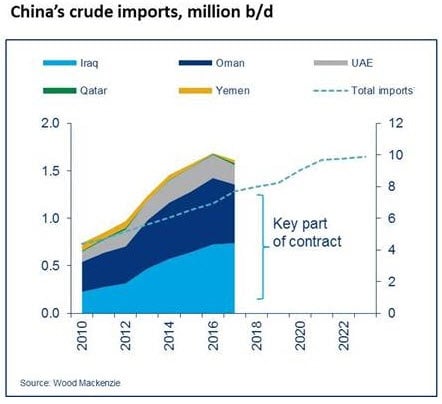 At current import volumes, the contract grades could account for trade of about RMB200 billion. This will help the Chinese government in its efforts to internationalize renminbi. In the longer term, the futures exchange will enable China's crude-buying patterns to become more transparent to the world, says Gupta. Prices assessed at the Shanghai exchange will reflect China's crude supply and demand. They could also become a reference for China's crude market, which is likely to start having a bigger influence on global crude prices.

“As a start, we expect more influence on Basrah Light and Oman prices, as they account for a significant portion of the contract volumes. China imports about 600 kb/d of Oman crude. This is large enough to start influencing Oman prices, which are retroactively set by the Oman Ministry of Oil and Gas,” says Gupta.

“Crude suppliers such as those from the Middle East and the U.S. will have to ensure that pricing of their crude to China remains competitive with China's marker grades. Once established, China's reference crude prices could also act as a regional benchmark for negotiations of spot or term crude oil prices in other markets, such as Japan and South Korea. There is a precedence from the iron ore and coal markets, where China’s domestic prices and importing patterns are now treated as reference points for the industry.

The Shanghai International Energy Exchange has allocated a total storage capacity of 5.95 million cubic meters (37.42 million barrels) at six sites along China's coast to receive crude under these contracts. Although not large, this storage will facilitate price assessments and could start to act as a hub for re-exports since the designated storage is located in free-trade zones. 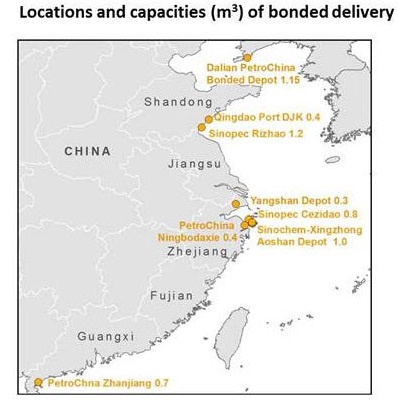 “It's early days, and the speed at which China's futures market influences crude prices will depend on several factors,” says Gupta. “In the short term, we do not expect material movements of volumes to the Shanghai exchange from other established exchanges such as NYMEX and ICE. It may take years for market participants to build confidence in China's benchmark.

“The impact on prices will be marginal if there is not enough liquidity. Absence of a paper market could limit liquidity, as these contracts are expected to be physically settled. Further, the contracts are limited to seven grades that account for only 15 to 20 percent of China's crude imports. The presence or absence of major buyers or sellers can cause large speculative price swings in the exchange benchmarks. Government intervention to prevent such movements could further discourage foreign participants.

“Given these contracts are traded in renminbi, the sellers will have to bear the risk arising from any adverse movements in Chinese exchange rates. Sellers may have to hedge their risks, which could add to the cost,” says Gupta.