China’s Ningbo Zhoushan Port marked a milestone in its development lifting 30 million containers in 2021 ensuring its position as the world’s third busiest container port complex. The achievement is significant as 15 years ago the port ranked fifteenth in the world, and also came in a year when the container operations were interrupted by a COVID-19 outbreak in August.

A ceremonial lift of the 30 millionth container took place on the morning of December 16 in the Meishan Port District with the decorated box hoisted aboard the 20,000 TEU COSCO Shipping Pisces. To emphasize the port’s success at automation, the command for the container lift was given remotely and employed a remote-controlled bridge crane and a smart truck.

China currently has seven of the 10 busiest container ports in the world. The Ningbo Zhoushan port complex experienced just over a four percent growth in volume in 2020 handling 28.7 million TEU. While it is among the fastest-growing ports in China, it, however, is far behind the global leaders which are Shanghai, which handled 43.5 million TEU in 2020, and Singapore, which handled nearly 37 million TEU. 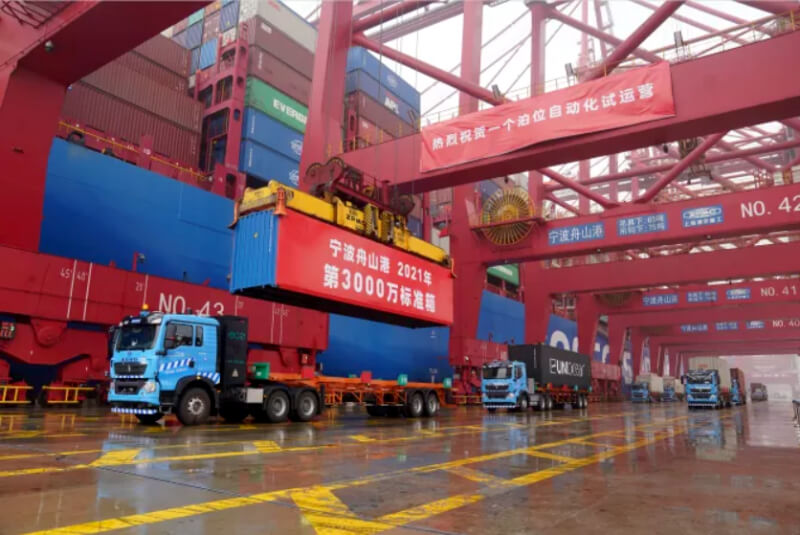 The container transportation business of Ningbo Zhoushan Port started in the 1980s. According to the Chinese officials at yesterday’s ceremony, the first box was moved on July 22, 1984, with the district handling just 323 TEUs that year. In 1994, the container volume broke 100,000 and one million in 2001.

The significant growth for the port came in 2005 with China’s decision to begin large-scale construction projects and the integration of Ningbo and Zhoushan. The volume quickly grew and by 2015 the port passed the 20 million TEU mark. Officials point to the port’s increasing regional role and the importance of the port complex in China’s Belt and Road strategy for the region. They have greatly expanded rail links with the port and are exploring international multi-modal trains from the port.

Expansion of the port complex continues with 27 new routes added in 2021 by the shipping lines operating from Ningbo Zhoushan. Currently, the port is part of 287 different routes. Additions to the port facilities included this year new berths no. 8 and 9 at the Meishan Port Container Terminal as well as upgrades at other terminals and opening of additional new berths.

The Ningbo Zhoushan complex is also highly automated and seeks to be a leader in digitalization. In the Meishan Port District, one terminal handled more than 2.6 million boxes with automated container operations, approximately 40 percent of its total volume. 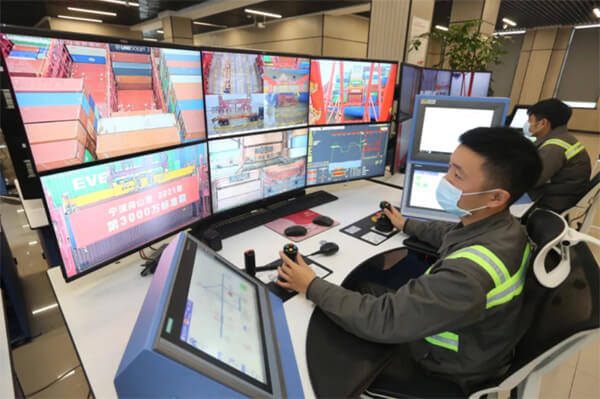 The entire port complex is controlled by a single center with a domestically developed system, the first in use in China. Port officials cited the high level of automation as helping to manage for example a 24 percent increase in the volume of empties arriving in the first ten months of 2021. Among the operational modes they are employing is direct loading at the port and direct loading at the ship’s side of containers. They noted that this eliminates the need for port storage and multiple loading and unloading for both import and export goods.

The port is highly efficient. In September officials reported that the average waiting time for foreign trade container ships was 30 hours, which was a reduction of nearly 10 hours from August which had been impacted by the suspension of operations at the Meishan container terminal for nearly two weeks as part of China’s zero-tolerance to COVID-19. Berthing time for the trunk line was maintained at about 23 hours as of the end of September, and the berthing time in the major international and domestic ports was reported to be relatively short.