New tariffs took effect on Sunday as part of the on-going U.S.-China trade war. For the first time, China has added a five percent tariff on U.S. crude.

The U.S. began imposing 15 percent tariffs on over $125 billion of Chinese goods including clothes, footwear, smart watches and flat-panel televisions.

U.S. President Donald Trump has indicated that he aims to reduce U.S. reliance on China. 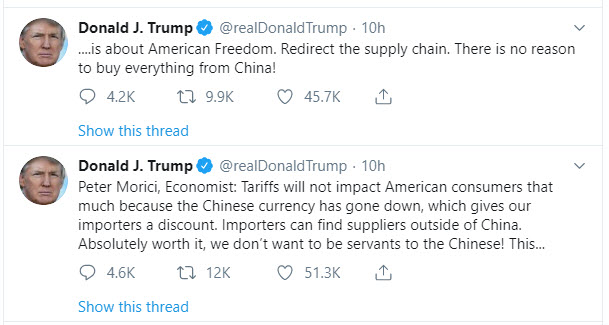 Chinese state media quotes Qi Zhenhong, head of the China Institute of International Studies, a government think tank, saying that new tariffs by the United States on Chinese products will backfire and hurt the U.S. economy, but will not dampen Chinese development in the long run.

Earlier this month, Tariffs Hurt the Heartland, a national campaign supported by over 150 of America’s largest trade organizations representing retail, tech, manufacturing and agriculture, released a statement after the President announced tariff increases on $550 billion in goods American consumers and businesses buy: “The administration is betting the health of our entire economy on a tariff strategy that is a proven loser. These added tariffs will ratchet up consumer prices, stall business investment, escalate uncertainty and cost American jobs. Congress can’t sit on the sidelines any longer while jobs, retirement savings and local farms are put at risk by a trade war that gets more dangerous by the day. Enough is enough.”

Talks between China and the U.S. are on-going.