China has launched a new-generation satellite to support its global navigation and positioning network designed to rival the U.S.-operated GPS.

Launched from Xichang Satellite Launch Center in the southwestern province of Sichuan, the satellite is the 20th satellite for the BeiDou Navigation Satellite System (BDS), and puts China another step closer to providing a global alternative to GPS.

For the first time the satellite features a hydrogen atomic clock, reports Xinhua.

The first BeiDou satellite was launched in 2000 as part of a program to provide positioning, navigation, timing and short message services in China and other Asian countries.

The BeiDou system became operational in China in December 2011, with 16 satellites in use, and began offering services to customers in the Asia-Pacific region in December 2012. China plans to expand the BeiDou services to most of the countries covered in its "Belt and Road" initiative by 2018 and to offer global coverage by 2020.

China has reportedly already installed the navigation system on more than 50,000 Chinese fishing boats and in November 2014 the Maritime Safety Committee of the IMO formally included BeiDou in its listing of satellite navigation systems approved for use at sea.

In May this year, China and Russia signed a “China’s BeiDou system and Russian Glonass system Compatibility and Interoperability Cooperation Joint Statement” to promote the common development of the two systems.

Other systems, operational globally, include the European Union’s Galileo system which is expected to be in full service by 2020, the Indian Regional Navigational Satellite System (IRNSS) and the Japanese Quasi-Zenith Satellite System. 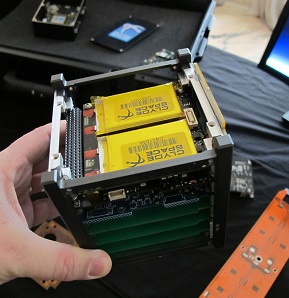 The satellites are part of the nation’s STU-2 program, and they are expect to provide data that willl help avoid tragedies such as the missing Malaysia Airlines Flight MH370.

The CubeSats can also be used to provide information support for China’s icebreaker Xuelong (Snow Dragon).

Like a Rubik’s cube, the CubeSats are composed of smaller cubic units. They weight just 6.8 kilograms (15 pounds).

The STU-2 program is the first of its kind in China.

China has also just launched a group of four satellites to be used for commercial remote-sensing services. The “Jilin-1” satellites, launched from the Jiuquan Satellite Launch Center in Northwest China’s Gansu province, include one optical remote-sensing satellite, two satellites for video imaging and another for imaging technique testing.

All four satellites were developed and produced by Chang Guang Satellite Technology Co Ltd. The company will also take charge of commercial operations of the satellites to provide remote-sensing data to be used for the monitoring, development and surveying of resources as well as mapping and disaster prevention for domestic and overseas clients.

Jilin, one of the country's oldest industrial bases, is developing its satellite industry as one of the nation’s new economic pushes.