Construction of China’s first domestically built large cruise ship marked a key milestone in mid-September as structural work was completed. Assembly for the 135,500 gross ton cruise ship began in November 2020 with construction scheduled to be completed in 2023.

The final pre-assembly placed on the unnamed cruise ship included the deckhouse and funnel for the vessel. According to SWS the assembly measured approximately 115 feet by 85 feet and was made up of six steel sections along with one aluminum alloy section. Standing nearly 79 feet, the shipyard said it was a complicated installation as “the center of gravity of the total section is high and the hosting point is low.” The assembly required an “extremely high hoisting,” after careful planning and was successfully fitted to the ship. It was the last penetration into the ship to be completed. 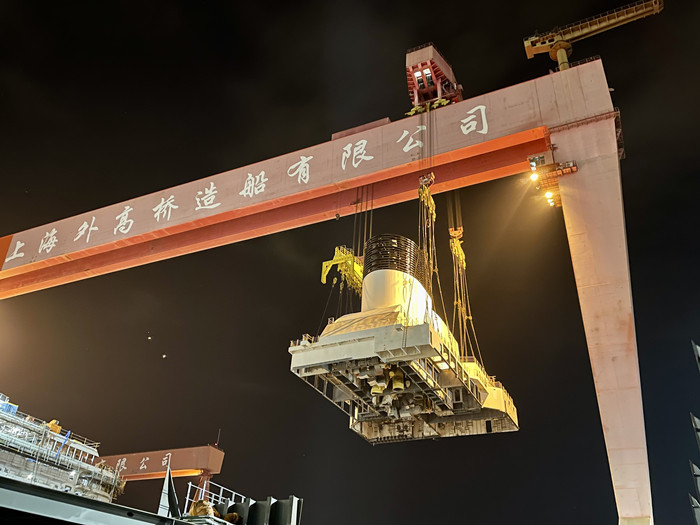 Hoisting the last assembly to the cruise ship (SWS)

China and the shipyard have made significant investments to develop the cruise ship construction business. SWS created what it calls a cruise technology industrial park to support its entry into the sector that so far has been dominated by the European shipyards. It included the addition of a new office building and facilities to support contractors, as well as renovations to one of the dry docks and establishing a thin plate block assembly line. The first steel for the cruise ships was cut on October 18, 2019.

The first two cruise ships for the joint venture will each measure 1,062 feet in length and have a maximum passenger capacity of 5,246 people. Each ship will have 2,2125 passenger cabins and is being built in coordination with Lloyd’s Register. The first ship now moves into the fitting out stage completing its interiors.

Recently, Italy’s RINA class society reported that it was also working with SWS planning for the construction of larger cruise ships. RINA said the ship would be 140,000 gross tons measuring 1,188 feet in length. Delivery of the larger cruise ship, which will accommodate up to 6,500 passengers, is reportedly set for 2025.