While much of the focus has been on the challenges shippers and carriers face getting imports offloaded at their destination ports and delivered, there are also growing backlogs at Chinese factories and ports. The problems developing at the front end of the supply chain are now raising concerns about further challenges contributing to global delays and shortages likely to drive shipping costs even higher.

The latest analysis of trends across the global supply chain from project44, an advanced visibility platform for shippers and logistics service providers, highlights the depth of the challenges developing at the front end of the supply chain from China. While the record-setting 73 ships anchored off Los Angeles and Long Beach made headlines last month, project44 believes the problem is becoming equally acute at the source with port congestion at China’s largest ports underscoring the scale of the situation. Containerized trade through Chinese ports accounts for 40 percent of global container trade with the leading trade routes emanating from China’s ports to the west coast of the United States and Northern Europe.

In addition to the disruptions and delays being caused at the terminus points in the supply chain, there is also a range of issues that are impacting the ability to move goods out of China. These range from lingering backlogs as a result of the COVID-19 closure and controls at the ports, last week’s Golden Week holiday, and the impact of Typhoon Chanthu, which closed the ports at Shanghai and Ningbo. Moreover, businesses across China are facing a power-shortage crisis due to coal shortages and the government’s strict rationing of electricity.

The extent of the growing supply chain problems originating in China is demonstrated by increasing dwell times at China’s ports, rollover rates that remain at elevated levels, and longer lead times for products from the ports to reach their destinations. According to project44, these numbers spell further product shortages, delays for businesses and consumers, against a backdrop of holiday sales and a global post-Covid recovery.

“We can expect these growing backlogs across Chinese manufacturers and ports to exacerbate imbalances at US and European ports,” says Brazil. 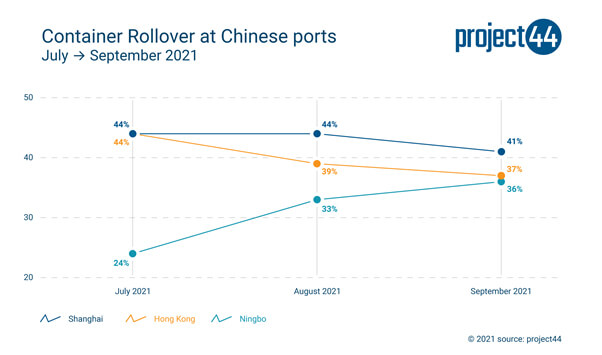 Container rollover rates, defined as the percentage of containers that miss their scheduled sailings, have stayed high, indicating that Chinese ports are not making significant headway in dealing with excess cargo. project44’s data indicates that rollover rates are still rising, reaching 36 percent in September at Ningbo. For the ports of Hong Kong and Shanghai, rollover rates although showing a slight reduction remain high at 41 and 37 percent.

“When there are cargo rollovers due to vessel space capacity, overbooking, blank sailings, etc, additional costs will be incurred by way of port costs which contributes to increases in freight rates,” says project44. The delays caused by cargo rollovers also affect production and delivery patterns at the destination ports as customers who have placed orders for raw materials for manufacturing or retail goods for consumers cannot get their goods in time.

project44’s real-time supply chain visibility platform highlights that the lead times for shipments from China to U.S. West Coast have drastically increased in 2021 compared to 2020 and 2019. Lead times from China’s primary ports at Shanghai, Qingdao, and Yantian are each up by more than a third when compared to 2019.

“As it becomes increasingly hard to get inventory from factory floors to end-consumers, competition for shipping capacity will heat up,” predicts Brazil. “At this point, pretty much everybody is feeling the pain. The challenge is less about achieving full inventory -- that ship has sailed -- and more about adapting to, and planning for future disruption.”