U.S. Customs and Border Protection (CBP) officers at the Port of Savannah, Georgia seized 967 pounds of cocaine October 29, 2019 in a container of scrap aluminum and copper being shipped from South America to Europe. The seizure set a new port record.

CBP said that its officers detected an "anomaly" during an examination of a shipping container aboard a vessel that arrived in Savannah from South America. When officers opened the container, they discovered 21 duffel bags containing 818 bricks of a white powdery substance, which field-tested positive for cocaine.

The cocaine weighed a combined 967 kilograms and has an estimated street value of about $31 million. 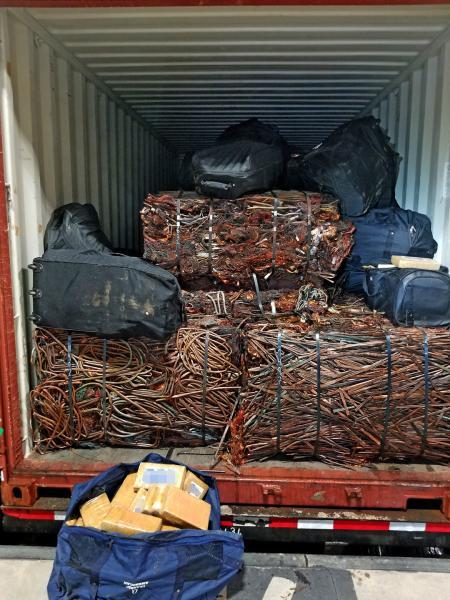 No arrests have been made in connection with the seizure, and DHS Homeland Security Investigations has launched an investigation. As with all narcotics seizures, an investigation will attempt to learn when and where the cocaine was concealed inside the containers and the location of its final destination.

“Drug trafficking organizations are relentless in their attempts to smuggle drugs into the U.S.” said Christopher Kennally, Area Port Director Savannah. “Through hard work, dedication and tireless efforts of Customs and Border Protection officers in Savannah, we will continue to hit back . . . by intercepting their dangerous drugs at our ports of entry before they can harm our communities.”

As with the record-setting seizure at Port of Philadelphia in June, the shipment was not destined for U.S. communities: according to CBP it was under way from South America to Europe, where average cocaine street prices are high.

Tuesday’s seizure is CBP’s largest cocaine seizure at the Port of Savannah and marks CBP’s fifth narcotics interception in the seaport during the past five months. CBP’s previous record 1,280-pound cocaine seizure occurred in May 2019. That cocaine, which was aboard a container being shipped from South America, had an estimated street value of about $19 million.

“In response to emerging narcotics smuggling trends and threats in the maritime environment, Customs and Border Protection has enhanced our enforcement strategy on targeting high-risk shipments from source narcotics nations that are either destined to Ports in the United States, or that pass through sovereign United States waters,” said Donald. F. Yando, Director of Field Operations Atlanta. “The scourge of illicit narcotics is a very serious international health and security threat, and CBP will continue to partner with our federal, state, local and international partners by intercepting these dangerous drugs when and where we can.

On average, CBP seized 63 kilos of cocaine per day across the United States in FY2018, roughly one tenth of the quantity seized at sea by the U.S. Coast Guard (575 kilos per day).

Though substantial, the Coast Guard's seizures represent a small portion of the flood of northbound cocaine from Colombia, Ecuador and Peru. The agency estimates that it intercepts about seven to eight percent of all non-merchant vessel cocaine shipments in the busy Eastern Pacific / Caribbean trafficking corridors. (Historically, it has reported a higher interdiction rate of 20-25 percent for the small craft it can individually identify and track, with improvement limited primarily by asset availability.)