Turkish authorities are reporting that a small general cargo ship sunk along the Black Sea coast on January 17. A search and rescue operation conducted by the Navy and Coast Guard reported that six crew members were rescued while three crew members had died. Later media reports raised the death toll to four while the Coast Guard said the search was ongoing for three additional sailors that were reported missing.

The 3500 dwt general cargo ship Alvin, registered in Palau in the western Pacific, was reported to be owned by a Ukrainian shipping company. The 46-year-old vessel, built in 1975, had sailed from Porti, Georgia, and was making its way along the northern coast of Turkey sailing to Burgas, Bulgaria before encountering bad weather. The Turkish Foreign Ministry reported that the ship had sought shelter in the Bartin anchorage on January 15 after encountering heavy rain, snow, strong winds, and high seas.

The Turkish Ministry of Transport and Infrastructure reported that the vessel, which had a length of 374 feet, had broken its back, splitting into two pieces and sinking. There was a total of 12 to 15 crew reportedly aboard, including two Russians and 10 Ukrainian sailors.

The ship, named M/V ARVIN, sank off the Inkumu Coast of the northern, Bartin province. Rescue teams have so far managed to rescue 6 of 12 crew members – all Ukrainian nationals – and reached the lifeless bodies of 4 others. But the search and rescue phase is not completed yet. pic.twitter.com/A8aQYxUarD

A heavy storm was hampering initial rescue efforts preventing helicopters from flying to the area. The first rescue efforts were reported taking place from land with three of the sailors having been spotted in a rocky area along the shoreline. "We continue search and rescue activities by land, but by land and sea is not possible," the governor of the region told the Turkish Anadolu news agency. "We are not stopping search activities."

A Navy frigate was later reported sailing to the area and the Coast Guard said that one of its boats and a helicopter had also joined the rescue mission along with a dive team. The Navy reported that it had also spotted lifeboats from the Arvin less than 2,000 feet from the shoreline. 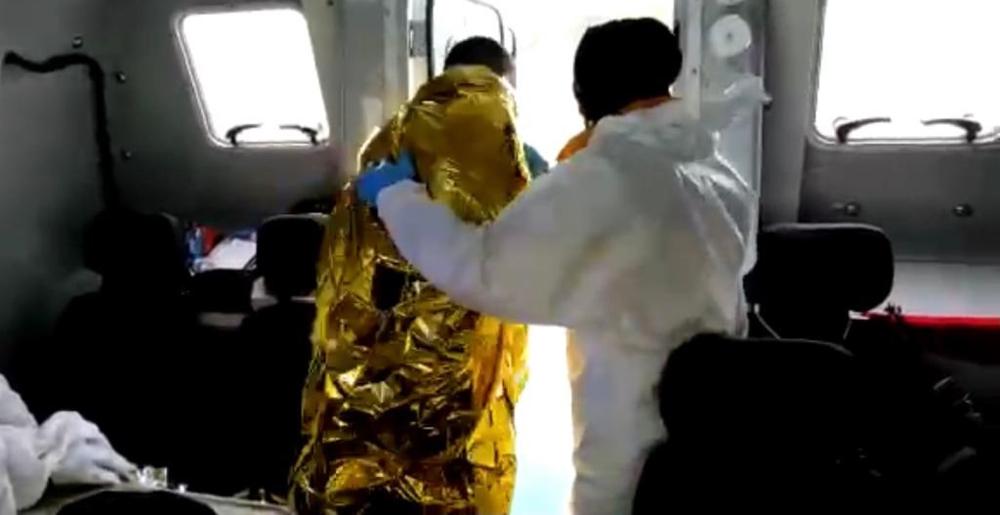 One of the rescued sailors - Turkish Coast Goard photo