Danish wind farm developer Orsted says that oil major BP is trying to keep it from building out the full extent of its planned Hornsea Project Four offshore wind development, a 2.6 GW installation off the coast of Hull, Yorkshire.

The project is currently in the pre-application phase for a UK development consent order (DCO), and construction has not yet begun. BP holds a development license for offshore carbon storage on a site that overlaps the Hornsea Four area. Orsted claims that the oil major is attempting to block installation of turbines on this section of the project, which would reduce the size of the development by about 25 percent.

In a filing with the UK's Planning Inspectorate, Orsted complained that "the objective of bp is to force exclusion" of wind turbines in the area in order to make way for CO2 subsea storage infrastructure. BP claims that the two projects cannot coexist on the same footprint, and that the carbon-capture project can not be built in areas with wind turbines because of the working area required for drilling rigs and recurring seismic surveys. Orsted maintains that both projects are compatible and can "work in harmony" if the two companies cooperate. Highly technical discussions between Orsted and BP are still under way about a possible resolution. 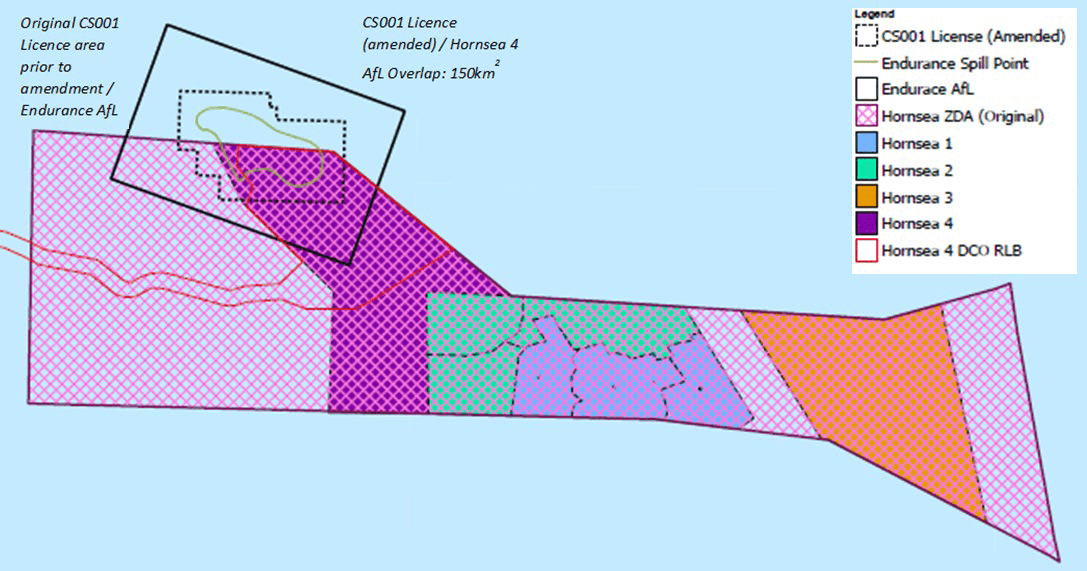 BP has joined with Eni, Equinor, National Grid, Shell and TotalEnergies in an offshore carbon storage project called the Northern Endurance Partnership, aimed at developing CO2 sequestration sites in the North Sea. Carbon captured from industrial plants in Teesside would be transported to the offshore site about 45 nm off the coast of Hull, where it would be injected into a giant saline aquifer. The combined project is scheduled to go live in 2026 and achieve net zero (using offsets) as early as 2030. It is backed by a $31 million development grant from the UK government, plus another $64 million for the onshore carbon capture components.

Hornsea Four is the last in a series of expansion projects at Orsted's massive Hornsea offshore wind development. Hornsea One is the world's largest wind farm, and Hornsea Two will overtake it to set a new record once completed later this year. Hornsea Three is licensed for later construction, and Hornsea Four is still in permitting.