Former racing catamaran Energy Observer has been sailing the world as the first energy-autonomous hydrogen vessel. Now, an official partner in the project, Toyota, has developed a fuel cell system for the vessel. The technology is also being made available for other maritime applications.

Energy Observer operates using a mix of renewable energies and an onboard system that produces carbon-free hydrogen from seawater.

Toyota's fuel cell system was first introduced in the Toyota Mirai, the world's first mass-produced hydrogen fuel cell electric vehicle. The company has more recently been exploring the use of its fuel cell system in other applications such as buses and trucks.

The maritime-specific fuel cell system was developed by Toyota Technical Center Europe over seven months. It required a re-design which was accomplished using components first introduced in the Toyota Mirai fitted into a more compact module suitable for marine applications. 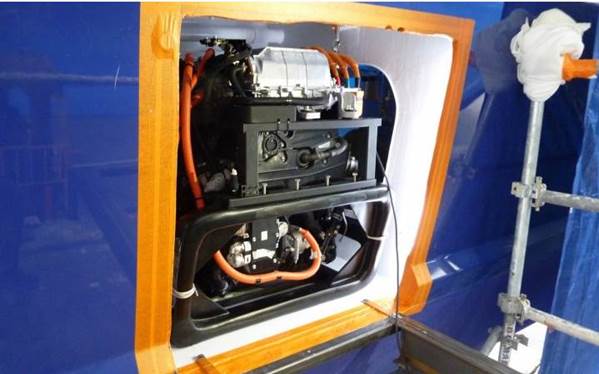 To ensure compatibility, the Toyota fuel cell module was tested with Energy Observer while the boat was at dock at the end of last year. Currently, the system is undergoing its final full power testing at sea prior to the Energy Observer officially setting sail from Saint-Malo Port this month for her 2020 voyage.

So far, Energy Observer has visited 25 countries, 48 ports and cruising range has reached approximately 18,000 nautical miles for three years. Ultimately, the operators of the vessel plan to meet people in 50 countries and 101 ports with an aim of demonstrating the advantages of clean energy systems.

Toyota aims to develop a hydrogen society based on its challenge to "Establish a future society in Harmony with Nature" as stated in its Environmental Challenge 2050.